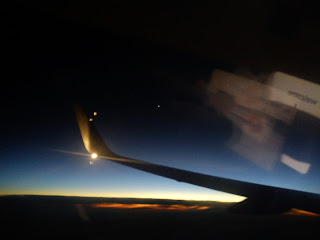 Venus seen through the cabin window in the early twilight. Venus is the bright dot near the centre of the image, Jupiter could be seen as well, but didn't come out in the mobile phone image, click to embiggen

I had to go to Melbourne for work this week. This involved getting up at dark o'clock, driving through the early morning wisps of fog and drinking expensive airport coffee in an attempt to stay awake. Luckily we took off before the fog thickened, grounding subsequent flights.

Flying into Melbourne, before we flew below the cloud, I got to see Venus and Jupiter floating together above the wing of my aircraft, as the sky brightened with the on coming sunrise.
This got me to thinking. All those videos and pictures that are taken either pointing at or very close to the Sun, that purport to show unknown planets, if these objects really were planets rather than lens flares, internal reflections, clouds or aircraft, why don't we see them after sunset? 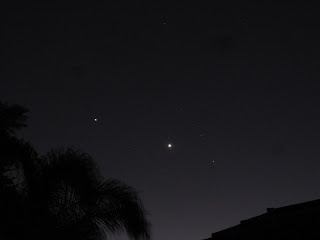 Photographing Venus in the daylight is much more of a pain than just seeing it. You generally need to wait until late afternoon, and carefully hide the Sun behind some bulky object to be rewarded with a faint white dot that can be barely seen on your image. 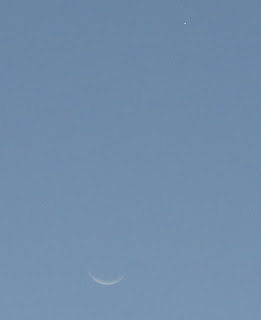 Venus (bright dot to the upper right of the image) above the Moon on September 11, 2010. This image taken with my Canon IXUS 100 IS on 3x zoom, auto exposure. Taken approximately 3:00 pm.

Now in the alleged "planet" images, the Sun is usually in frame, sometimes the camera is pointing almost directly at the Sun. For a planet to be visible in a standard commercial camera under these circumstances it has to be bright, very bright. Much, much brighter than Venus. These objects are almost invariably on an east-west axis, and between 10-20 degrees from the Sun. They are around for quite a while too, as these reports come over periods of several months.

Now, Venus can be seen down to 5 degrees from the Sun, these objects should be blindingly obvious moments after sunset (or before sunrise). Even if they were only as bright as Venus, an object 10 degrees from the Sun as bright as Venus would be startlingly obvious, especially to the legions of folks like me who get up in the early morn, or race out after sunset to take images of planets like Venus, Jupiter and Mercury. Even if there is a run of bad weather, these "objects" have been reported over a substantial period of time, and would have been easily seen if they represented a real planet. 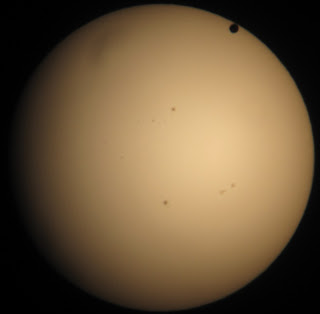 Transit of Venus, Just before 3rd contact at 1:52 pm ACST.

Speaking of Venus, we just observed the Transit of Venus, where the position of Venus was measured with outstanding accuracy by hordes of professional and amateur astronomers and school kids world wide. If there was a substantial planet that had been lurking in the inner solar system for months Venus's orbit would be so messed up by that planets gravity that it would have been obvious even in crude timings.

And what about the STEREO and SOHO satellites? These scrutinize the near solar environment and any object that comes within binocular distance of the Sun will be picked up. I regularly see Venus, Mercury, Jupiter, Saturn and even Uranus in the STEREO images as they pass into the twilight. If there is a planet bright enough to be picked up by amateur photographers lurking near the sun, why hasn't it turned up in the STEREO imagers? 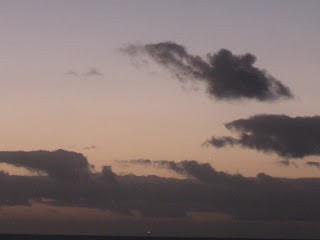 Venus at 5:45 pm ACST on May the 27th 2012, Venus is a mere 3 degrees above the horizon at this time (click to embiggen to see it more clearly).
So if these objects captured in video cameras are planets, they are unusual planets that are brighter than Venus in cameras, but invisible to the unaided eye, invisible to the STEREO and SOHO cameras that can pick up faint asteroids and have no gravitational force.

Or they could be lens artefacts from pointing a camera nearly directly at the Sun. What do you think?

Comments:
All thos silly pictures out there with these so called nibirus, nibiru moons,vortex and ill skip the usual poor selection of words use by Donny Gillson to claim things that they arent around the sun. WE can all see comets,planets and earth moons or jupiter/saturns moon when the time/condition is right and most everyone on this planet can observe these. even poor binoculars can see them..as for lens flares , well they are whqt they are and can only be seen on the camera of the owner.

If all these dumb claims of a nibiru i saw in past couple years on picture..it would have made headlines pretty fast and astronomers arouind the world would have track it...astronomers can track a lot of comet, the media talks about these comets..but why, they never talk about lens flare nibiru..because..IT DOESNT......FREAKIN EXIST..ARGGHHH...lol