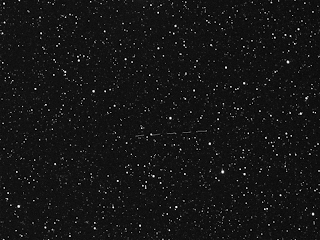 2012 LZ1 imaged with iTelescope T14 on June 14 2012. The image is a stack of 5x120 second exposures, stretched in  FITS Liberator and stacked with  ImageJ.Click to embiggen

It was discovered by Rob McNaught on June 10th 2012 from the Uppsala Telescope at Siding Spring Observatory.

2012 LZ1 will be at its closest approach of 13-14 lunar-distances (that's the distance between the Earth and the Moon, 0.036 AU) on June 14 23:10 UT  according to the latest MPEC ephemeris.  That's 9:10 am AEST, but don't worry it will sill be visible from Southern skies when night falls, althoug at magnitude 14 you will need a grunty system to image it.

Here's an animation from Nick Howes and team. Here's an image from Kevin Deakes also taken with T14 on the 14th.

Unlike the recent NEOs 2012 LZ1 is far enough away that a planetarium program will not have too great a parallax error  (although the topocentric coordinates will always be better).