The New Moon is Monday May 21. The transit of Venus is three weeks away. Venus is visible very low in the western evening sky close to the star Elnath. On the 22nd and 23rd the thin crescent Moon is close to Venus. Jupiter is lost in the twilight. Mars is in the eastern evening sky, close to the bright Star Regulus. Saturn is visible  near the star Spica. Mercury is visible in the morning sky. On the 19th Mercury is not far from the cresent Moon. 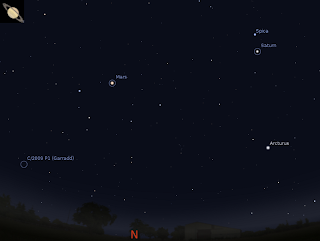 Evening sky looking North as seen from Adelaide at 8:00 pm local time on Saturday May 19 showing Mars, Regulus, Saturn and Spica and comet Garradd. Similar views will be seen elsewhere at the equivalent local time. The inset shows the telescopic appearance of Saturn  at this time. Click to embiggen.

The New Moon is Monday May 21.

Mars is close to the bright star Regulus in Leo. However, it continues to move away over the week.

Saturn is above the north-eastern horizon, not far from the bright star Spica. Saturn is high enough in the northern sky for telescopic observation in the late evening, being highest at 10:00 pm local time. local time. Saturn was at opposition, when it is biggest and brightest as seen from Earth, on the 16th of April, but now is still a great time for telescopic views of this ringed world.

Comet C/2009 P1 Garrad is visible in the northern sky. At magnitude 9, it isnow observable only in telescopes . It's still relatively low to the horizon and the effects of light pollution means that the best views nder dark sky condition. 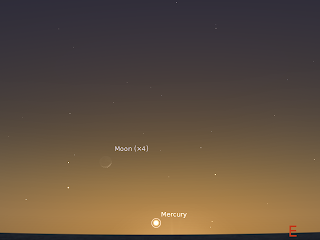 Morning sky on Saturday May 19 looking east as seen from Adelaide at 6:00 am local time in South Australia. Similar views will be seen elsewhere at the equivalent local time (click to embiggen)

Mercury is  visible above the eastern horizon by 6:00 am in the morning.

Mercury is sinking towards the horizon, but is still visible this week if you have a flat, unobstructed horizon (such as the sea).

On Saturday Mercury will be near the thin crescent Moon, low in the twilight. 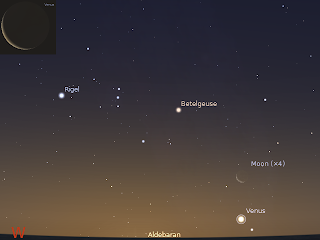 Evening sky on Wedensday May 23 looking north-west as seen from Adelaide at 6:00 pm local time in South Australia showing Venus near the Star Elnath. The inset shows the appearance of Venus seen telescopically at this time. Similar views will be seen elsewhere at the equivalent local time (click to embiggen)

Bright white Venus is visible in the evening western twilight sky from around half an hour after sunset for about 3/4 of an hour.

Venus remains in Taurus this week. It starts the week not far from the star Elnath, and doesn't move very far away.

Venus is slowly sinking towards the horizon, and will become more difficult to see. It is a thin crescent in even small telescopes now. In three weeks tine Venus will cross the disk of the Sun in a rare transit, the last until 2117. More details on viewing the transit will be published later.

ASCSA: The Big Snapshot of Australian Science Enga...
Venus, Friday 11 May 2012
Sunspot 1467 via Binoculars
More Flares Incoming! Aurora Possibilities Ahead.
More Flares from the Sun
Carnival of Space #248 is now here
The Sky This Week - Thursday May 10 to Thursday Ma...
iTelescope User Gallery of Astromomy Posts of the Day
Prepare for Flares, Active Sunspot 1467 Arrives wi...
Not Quite a Spectacular Comet Crash