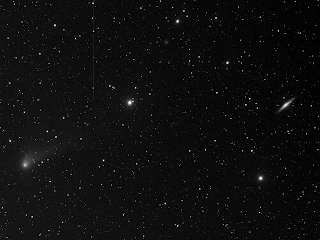 Finally got a shot of comet Garradd near the galaxy NGC 2683. I have a bunch of other Garradd shots I have just not had time to process yet, but I thought this one was the priority to get done.

Technically, it is a stack of 4 x 120 second luminance exposures, stretched in FITSliberator and stacked in ImageJ, the stacked SUMMED, then a square root process, followed by despeckling. I thought it came our rather well.