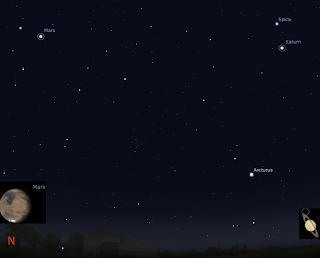 Evening sky looking North as seen from Adelaide at 9:00 pm local time on Saturday April 21 showing Mars, Regulus, Saturn and Spica. Similar views will be seen elsewhere at the equivalent local time. The inset shows the telescopic appearance of Mars, Saturn and it's Moons at this time. Click to embiggen.

The New Moon is Saturday April 21.

Mars is in the constellation of Leo. It is the brightest object in the north eastern sky, and its distinctive red colour makes it easy to spot. Mars is rising before sunset and is at its highest in the northern sky around midnight.

Mars is close to the bright star Regulus in Leo. However, it begins to move away now.

Saturn is above the north-eastern horizon, not far from the bright star Spica. Saturn is high enough in the north-eastern sky for telescopic observation in the late evening, rising before 6 pm local time. Saturn was at opposition, when it is biggest and brightest as seen from Earth, on the 16th, but now is still a great time for telescopic views of this ringed world. 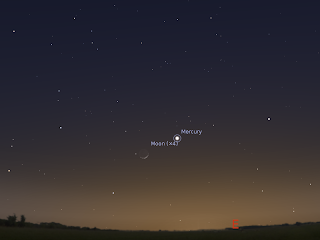 Morning sky on Thursday April 19 looking west as seen from Adelaide at 6:00 am local time in South Australia showing Mercury close to the crescent Moon. Similar views will be seen elsewhere at the equivalent local time (click to embiggen)

On the 19th, Mercury reaches the highest it will get above the horizon, and is visited by the thin crescent Moon. 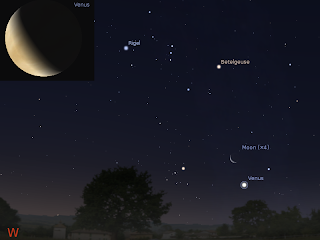 Evening sky on Wedensday April 25 looking west as seen from Adelaide at 6:30 pm local time in South Australia showing Venus near close the Hyades cluster with the crescent Moon nearby. The inset shows the appearance of Venus seen telescopically at this time. Similar views will be seen elsewhere at the equivalent local time (click to embiggen)

Bright white Venus is readily visible in the evening western twilight sky from around half an hour after sunset for around an hour and a half.

Venus continues to pass through Taurus this week and is draws further away from Jupiter.

Observation of Jupiter is now very difficult. Jupiter is very low to the horizon, and is quickly lost in the twilight.

With Mars past opposition and Saturn rising and coming closer to opposition, there are lots of interesting things in the sky to view with a telescope. If you don't have a telescope, now is a good time to visit one of your local astronomical societies open nights or the local planetariums. 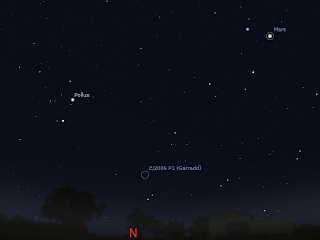 Comet Garrad is rising higher in the northern sky. At magnitude 7, it is observable in binoculars, it's still relatively low to the horizon and the effects of light pollution means that the best views are in strong binoculars or telescopes under dark sky condition. As the week progresses it will rise further above the horizon, improving its visibility.