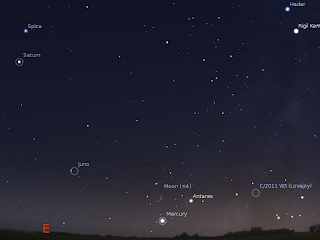 Morning sky looking north-east as seen from Adelaide at 5:00 am local daylight saving time on Friday December 23 showing Saturn near Spica and the waning Moon. Similar views will be seen elsewhere at the equivalent local time. Click to embiggen.

The New Moon is Sunday December 25.

Mars is in the north-eastern morning sky, in the constellation of Leo. It is heading towards Spica and Saturn.

Saturn is above the north- eastern horizon, not far from the bright star Spica.

Mercury appears low in the morning twilight. You will need a reasonably, clear eastern horizon to see it. On the 23rd, Mercury is close to the crescent Moon, forming an attractive triangle with the bright star Antares. The comet Lovejoy's location is shown (see below for more details). 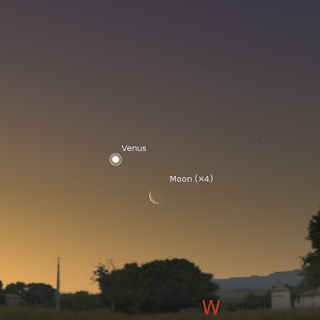 Bright white Venus is readily visible in the evening western twilight sky from around half an hour after sunset for somewhat over an hour. Venus is Capricornius this week, but does not pass any bright stars. On December 27, Venus is close to the crescent Moon.

However, Jupiter is still a great binocular and telescope object and will be for many weeks to come. Jupiter is visible for most of the night, setting in the early morning. 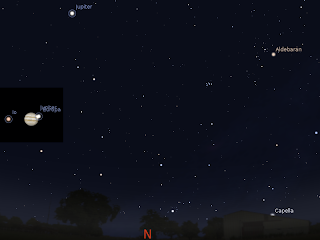 Evening sky on Saturday December 24 looking north as seen from Adelaide at 10:00 pm local daylight saving time in South Australia showing Jupiter. Similar views will be seen elsewhere at the equivalent local time. INSET: Jupiter and its Moons as seen at this time, Europa will pass in front of Jupiter from around 22:00 ACDST, Ganymede will be eclipsed and Io will also pass in front of Jupiter (click to embiggen) 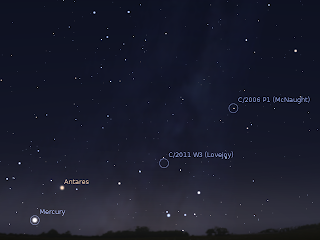 Eastern horizon as seen from Adelaide at 4:54 am ACDST on Sunday morning December 25 (an hour before sunrise). Similar views may be seen from other Australian locations at equivalent local time (click to embiggen).

Comet Lovejoy is a newly found Kreutz sungrazing comet that surprisingly survived after a close encounter with the Sun. While people have seen comet C/2011 W2 Lovejoy in daylight with telescopes, there is no unambiguous report of seeing comet Lovejoy by the unaided eye (the horrible weather hasn't helped).

There is a possibility that we might see a tiny tail and possibly the comet above the horizon in the twilight in the coming days, it almost certainly should be visible in good binoculars. The Stellarium image above shows where the comet should be at nautical twilight. You will need a flat, clear eastern horizon for a good chance to see the comet (if it is visible). But it should be easy to find near the spine of the scorpion.

In contrast comet C/2009 P1 will be easily visible in good binoculars as a small fuzzy ball with a short tail.