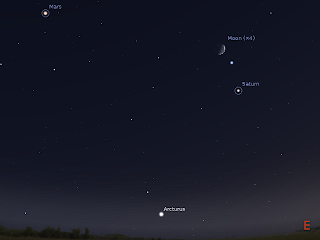 Morning sky looking north-east as seen from Adelaide at 5:00 am local daylight saving time on Tuesday December 20 showing Mars near Regulus and Saturn near Spica and the waning Moon. Similar views will be seen elsewhere at the equivalent local time. Click to embiggen.

Mars is in the north-eastern morning sky, in the constellation of Leo. On the 17th and 18th the waning Moon is close to Mars.

Saturn is above the north- eastern horizon, not far from the bright star Spica. On the 20th the Moon forms an attractive triangle with Spica and Saturn.

Mercury appears low in the morning twilight. You will need a flt, clear eastern horizon to see it. 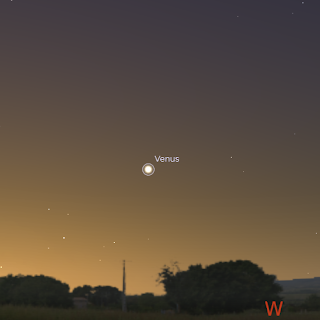 Bright white Venus is readily visible in the evening western twilight sky from around half an hour after sunset for somewhat over an hour. Venus leaves Sagittarius and enters Capricornius by the end of the week, but does not pass any bright stars.

Jupiter was at opposition, when it is biggest and brightest as seen from Earth, on Saturday the 29th of October. However, Jupiter will be a great binocular and telescope object for many weeks to come. Jupiter is visible for most of the night, setting in the early morning. 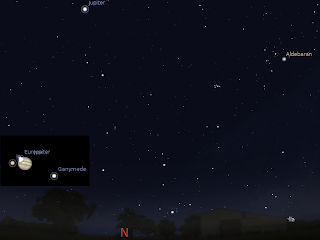 Evening sky on Saturday December 17 looking north as seen from Adelaide at 10:00 pm local daylight saving time in South Australia showing Jupiter. Similar views will be seen elsewhere at the equivalent local time. INSET: Jupiter and its Moons as seen at this time, Europa infront of Jupiter from around 22:00 ACDST (click to embiggen)

There are some good Jupiter Moon events, as on the evening of December 17. . 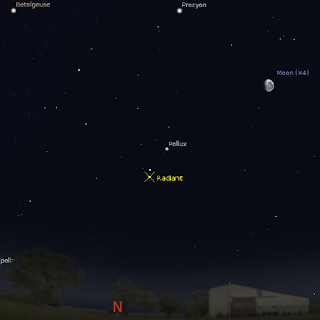 The radiant of the Geminid meteor shower above the northern horizon as seen from Adelaide on the morning of December 15 at 3:00 pm ACDST, similar views will be seen from other sites at equivalent local times.

The Moon will unfortunately be just above the Geminid radiant, so only low meteor rates will be seen. In Australia we should see roughly a meteor every 6 minutes.

I'm on Today Tonight, umm Thursday Night Tonight
Supernova 2011iv in NGC 1404 on Dec 11
Carnival of Space #227 is here.
Quick Shot of the Eclipse
Of Course the Eclipse is Clouded out
Just a Reminder of Tonights Total Lunar Eclipse (1...
Bright New Supernova in NGC 1404
Live Webcasts of this Saturdays Total Lunar Eclip...
In Which I am a Media Star Again
At the ASCEPT congress in Perth