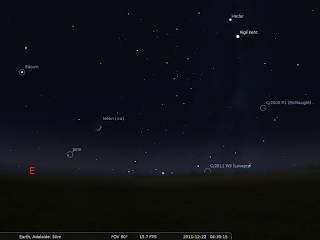 Location of Comet C/2011 W3 Lovejoy at 4:30 am on Thursday 22 December (roughly an hour and a half before sunrise) as seen from Adelaide, similar views should be seen elsewhere in Australia at equivalent local times. Although close to the horizon, a 10 degree tailwill stick up past the bright star above the comets position (click to embiggen).

I saw the tail of comet C/2011 W3 Lovejoy on Wednesday morning at 4:54 am, although from others descriptions and images, its obvious that earlier is better (around 4:00 - 4:30 am) , the tail is quite long, and is readily seen in the earlier hours.

You will need a relatively clear, level horizon, preferably without too many bright lights in the way. You may need to sweep the south-eastern horizon for the tail to pick it up, but once you see the tail you should pick it up with the unaided eye. The comet is fading, but also rising higher in the sky, so the tail should be a bit more obvious over the next few days, it might even be mildly spectacular for Christmas. Certainly worth getting up at Dark O'Clock for, the best comet since C/2006 P1 McNaught.