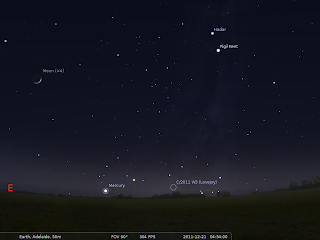 Location of Comet C/2011 W3 Lovejoy at 4:54 am on Wednesday 21 December (an hour before sunrise) as seen from Adelaide, similar views should be seen elsewhere in Australia at equivalent local times. Although close to the horizon, a 5 degree tail should stick up past the bright star above the comets position (click to embiggen).

I had no luck seeing Comet C/2011 W3 Lovejoy this morning, clouds of course. But two groups did. Peter Sayers in Tasmania (Image via Space Weather) could see it as a just unaided eye object in the twilight, while Vello Tabur couldn't see it in binoculars or unaided eye, but a five degree tail turned up in his DSLR shots.

I'll have another go this morning, hopefully the weather will be kinder, and I will be forearmed with knowledge of comet Lovejoys dimness.

Comments:
new here ::: Comet lovejoy MAY be the spaceship The maya carved into a few relics
see youtube.com/watch?v=615n54EMvjc then watch the video from sohodata.nascom.nasa.gov you will clearly see an orb 1/2 an inch infront of the comet the comets spiral and outgassing caused snakelike action of the tail the comet will shortly begin to manuver unexplanably if it is a shir of the return of the sky fathers of the maya

I flew from Johannesburg to Perth on SAA. I was the pilot and am clueless to astronomy. But i saw a comets tail. Initialy i thought it was other traffic as it looked like a long contrail left by another jet. Then i realized what i was looking at and was so excited! Now back in the hotel i googled what i was looking at and am now happy to find out it was a lovely comet. It was rather bright as it stayed visible until sunrise. Really exciting and really pretty. We lucky at what we get to see upfront!

here is the youtube video ling for the mayan glyph showing the sun bird (quezecotl bird ) http://www.youtube.com/watch?v=6I5n54EMvjc&feature=player_embedded
then compare with the soho blue film and the red video you can clearly see something leading thecomet on its path to the sun
Q; would the comet circling the sun anti rotation cause the comet to slow down rather than speed up (gravitational sling )