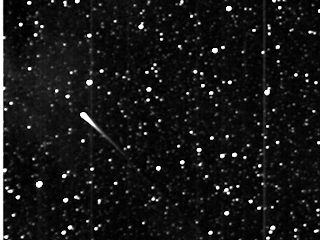 Comet C/2011 W3 Lovejoy (also known as the great "Birthday" comet of 2011) on the 12th of December as seen from the STEREO Behind spacecraft. Video is below (scroll down).

Comet Lovejoy is now so bright you can easily see it in the low resolution STEREO beacon images (see here to search the beacon images for the latest pictures, and see below for an example image). It has also entered the LASCO C3 imager field of view, this animation (10 mb) shows it entering as a bright streak to the bottom of the image.

Comet C/2011 W3 Lovejoy, discovered by Australian amateur Terry Lovejoy, is the first Kreutz comet found from Earth since 1970. It was found with a modest 8" telescope too! Terry's account of his discovery is here. Here's an image from Rob Kaufmann and one from Michael Mattiazzo shortly after discovery. 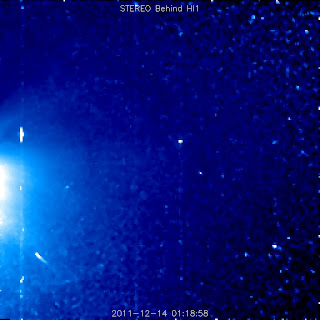 Terry is now the first person to discover a Sungrazing comet from both ground and space-based telescopes.

The big question on everyone's minds is "how bright will it get, and will it survive?" Kretuz comets have a tendency to evaporate as the approach, or pass close to the sun. Comet Al has a nice series of images showing this evaporation.

There's lots of discussion on the Comets ML list about this issue, the comet is probably 200 meters across, and there is an odds on chance it will just break up.

How bright will it get?


Again, there are lots of unknowns, a current magnitude plot is here, and should Comet Lovejoy survive it's journey inward, it might just get bright enough to see in the daylight. Might, as you can see from the images above (SkyMap image to the left, Stellarium image to the right, click to embiggen) the comet comes pretty close to the Sun, so it may not be possible to see it, even if the comet gets as bright as Venus.

The comet is probably (given all the unknowns and the very good possibility that it will disintegrate well before reaching the Sun) be reaching it's brightest at 11 am ACDST (around 11:30 AEDST) on the 16th of December in Australia. Do NOT attempt to locate the comet near the Sun unless you are an experienced solar observer, and have a decent solid building to block out the Sun.

Karl Battrams has a comprehensive page on the comet with nice GIF animations here.

Animation of comet Lovejoy from STEREO H1 Behind images on 12 December provided by Karl Battrams.