Can We See Comet Lovejoy in the Tuesday MorningTwilight 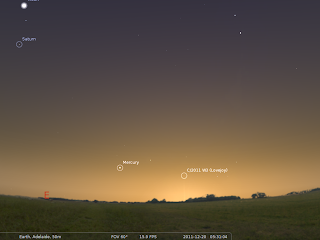 Eastern horizon as seen from Adelaide at 5:30 am ACDST on Tuesday Morning December 20. Similar views may be seen from other Australian locations at equivalent local time (cick to embiggen).

While people have seen comet C/2011 W2 Lovejoy in daylight with telescopes, there is no unambiguous report of seeing comet Lovejoy by the unaided eye (the horrible weather hasn't helped).

From the the latest STEREO images (see video below, Mercury and Jupiter are in the frame as well) and telescope reports, it seems that the comet is currently around the brightness of Mercury. Predicting what the comet will do, and how bright any tail will be, is fraught with uncertainty however.

There is a possibility that tomorrow morning (Tuesday Dec 18) we might see a tiny tail and possibly the comet above the horizon in the twilight. The Stellarium image above shows where the comet should be shortly after nautical twilight. You will need a flat, clear eastern horizon for a good chance to see the comet (if it is visible).

It's worth getting up for a look, this has been an extraordinary comet, and it's possible that we may see something beautiful (even though it is more likely we will see nothing).

Carnival of Space #228 is here.
Science Communicators Picnic
Comet C/2011 W3 Lovejoy and its Ion Tail
Terry Lovejoy Images his Comet in Broad Daylight
Can We See Comet Lovejoy in the Sunday MorningTwil...
Comet Lovejoy gets its Tail Back
IT LIVES PART 2!!!!!!
IT LIVES!!!!!!
Comet Lovejoy Exits the Sun
Comet Lovejoy Skims the Sun