Southern Skywatch May 2011 Edition Up 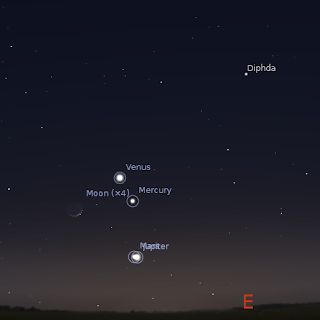 Morning sky looking east as seen from Adelaide at 6:00 am local time on Sunday May 1showing the crescent Moon near Venus, Mars, Mercury and Jupiter. Similar views will be seen elsewhere at the equivalent local time. Click to embiggen.

May has lots of action in the morning skies. The bright planets form and reform in spectacular alignments. Mercury, Mars and Jupiter join Venus for an extended planet dance with Venus coming close to mercury and Jupiter. Every morning the lineup changes, so there's lots to watch.

Venus is now a gibbous shape in small telescopes. Venus meets up with the crescent Moon twice this month.

Saturn is past opposition, when it is biggest and brightest as seen from Earth. Saturn is still an excellent telescopic object in the evening. Good telescopic observation can be had from around 9 pm on.

The Eta Aquariid meteor shower should put on a nice show this year. Although the peak is on the 6th of May, Australians should see the best rates on the mornings of 7 and 8 May.