Sorry to Dissapoint the Nibiru/Elenin Folks, It's Just the Hour Glass Nebula 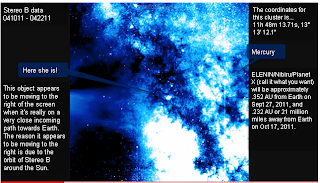 Still from a video which confuses the hourglass nebula with the comet C/2010 X1 Elenin. (click to embiggen)

Look, I don’t want to make this blog all Elenin, all the time (despite the fact that it is a nice little comet), but some of the “it’s Elenin we are all doomed” posts on the web can be used to illustrate some astronomical principles.

Reader Kevin Heider alerted me to this video on YouTube, purporting to show comet Elenin hurtling towards us[#]. Now, it’s not Elenin, but reviewing the video and thinking about what you see can help people understand the sky, and what comet hunters are up against. 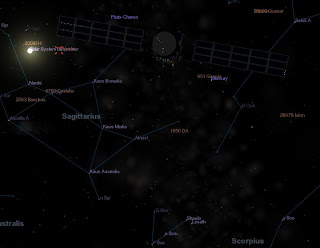 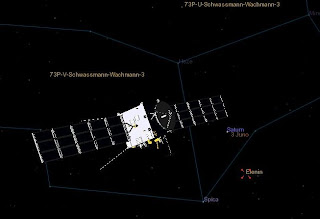 The images showing the purported Elenin come from the STEREO Behind space craft. Now as people know I’m a great fan of STEREO. I’m part of the Stereohunter comet hunters group and Comet Al and I discovered Mercury’s tail in STEREO images. So I have a bit of an insight into the images, I also have access to a lot of tools most people don’t have, so it’s easier for me to analyse these images. It was made doubly easier because I had my own STEREO images from that time frame, as I was looking for comet C/2011 C1 McNaught which is in the STEREO frame (but not in the video images, that section is cropped out of the video, and it’s insanely faint anyway).

Looking at the video, three things jump out at you that should make you suspect this is not Elenin. Firstly, the images are highly exposed, the faint Milky Way is extraordinarily bright, and details are blurred. The purported Elenin is a large fuzzy blob, not looking comet-like at all. Secondly, even though the entire image is overexposed, the purported Elenin is very bright. Elenin is currently very faint, visible in only large amateur telescopes (see images here and here), so it shouldn’t look anything like that. In fact, Elenin is dimmer than C/2011 C1 McNaught, which is barely visible in the STEREO images (all props to Comet Al’s eyesight).

Finally, look carefully at video, you can see that while the entire frame moves due to the orbit of STEREO around the Sun, the mysterious object stays still with respect to the stars, while Mercury zips past the stars. I've done my own video (see YouTube image below), where I have aligned the frames so the backgrund stars don't move. You can clearly see the object doesn't move. 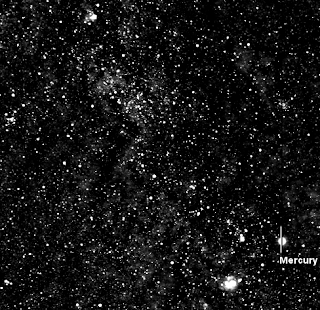 Also in the full frame but cropped from this video (otherwise the video would be huge) is the asteroid Vesta, and the comet C/2011 C1 McNaught (and Pluto, but it is too faint for the STEREO imager). These also zip along with respect to the stars.

In fact any Solar system object bright enough to be picked up by STEREO will move against the background stars as it orbits the Sun. A distant object might move slowly, but it will move visibly over this time frame. So the mystery object is not a planet, comet or other solar system object. What is it?

Here I show an image that I made from the STEREO files, I haven’t cranked the brightness up so you can clearly see it’s a bunch of stars with an associated nebulosity, it’s obviously some sort of star cluster. Now you could go to a planetarium program and try and sort out which one it is, which is not a trivial task[*]. This is where my tools come in handy; I had already loaded that field into astrometery.net to identify the stars in the field in preparation for comet so I knew that the object was M8. It is identified as the hourglass nebula on the astrometry field, but it is part of M8 which makes up the entirety of the object. 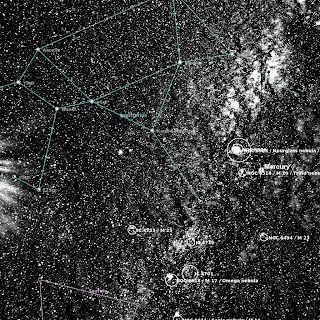 Astrometery result showing the objects in the STEREO field of view (click to embiggen).

When you see something like the video we just discussed, think to yourself, what would an object orbiting the Sun actually do? What other objects could look like this? Is what we see consistent with what we know about this type of object. Every day, comet hunters around the world are faced with the challenges of sorting out camera defects, cosmic ray artefacts, passing asteroids and all manner of distractions as they hunt for new comets. Do you think they would miss something obvious like the object in this video (remember it was in a series of images with a genuine faint comet)? So now you have some of the tools needed to sort out reality from hype, and some of the tools comet hunters use.


[#] I suspect this is a wind-up or hoax, rather than a genuine “look I’ve found Niniru/Elenin” video, it is still good for learning purposes though.
[*] The video actually give the coordinates of the object, which if you plug this into say, WikiSky will bring up M8 . This is why I suspect the video is a hoax or windup.


Mercury and M8 in the STEREO imager.

Now there are claims that CW Leonis is Elenin.

Good catch Kevin. I have a post up from when CW Leonis was though to be Nibiru. http://astroblogger.blogspot.com/2009/08/nibiru-it-is-not.html which gives pictures and all.