The New Moon is Tuesday May 3. Venus, Mercury, Mars and Jupiter are visible lined up in the early morning. Jupiter becomes more prominent this and comes close to Mars. On April 30th and May 1st the crescent Moon joins the line up for spectacular views. Saturn is well placed for telescopic observation in the evening sky. 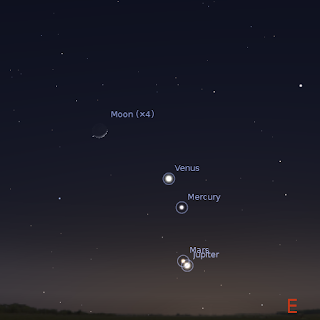 Morning sky looking east as seen from Adelaide at 6:00 am local time on Saturday April 30 showing the crescent Moon near Venus, Mars, Mercury and Jupiter. Similar views will be seen elsewhere at the equivalent local time. Click to embiggen.

The New Moon is Tuesday May 3.

This week sees a spectacular line up in the morning sky.

Bright white Venus is readily seen in the early morning sky in Pisces. Venus is "gibbous" phase, and will progressively become more full (and smaller) over the coming weeks. Below Venus are Mercury, Mars and Jupiter.

Mercury is readily visible in the eastern twilight below Venus. As the week progresses it will become even more prominent and draws closer to Venus. The pair are very close by the end of the week. Mars and Jupiter are below the pair, with Jupiter closing in on Mars. Jupiter and Mars are at their closest on May the 1st. Jupiter may be initially difficult to see if you do not have a fairly clear, level eastern horizon. However, by the time of the Mars encounter it should be easy to see.

The Moon joins the line-up on April the 30th and May the 1st making for a spectacular display in the morning sky. 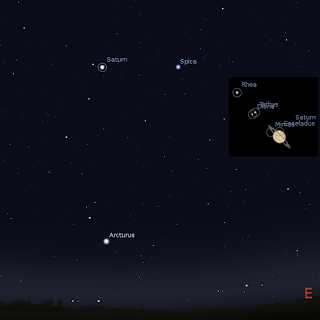 Evening sky on Saturday April 30 looking east as seen from Adelaide at 8:00 pm local time in South Australia showing Saturn near Spica. Similar views will be seen elsewhere at the equivalent local time.

Inset,the telescopic view of Saturn on the 30th , you will need a fairly large telescope to see any moon other than Titan. Click to embiggen.