The Sky This Week - Thursday March 31 to Thursday April 7

The New Moon is Monday April 4. Venus is visible in the morning sky initially in the constellation of Aquarius. On the 31st of March and 1st of April the crescent Moon is close to Venus. Mars is visible below Venus in the early morning. Saturn is well placed for telescopic observation in the evening and is biggest and brightest on the 4th of April. 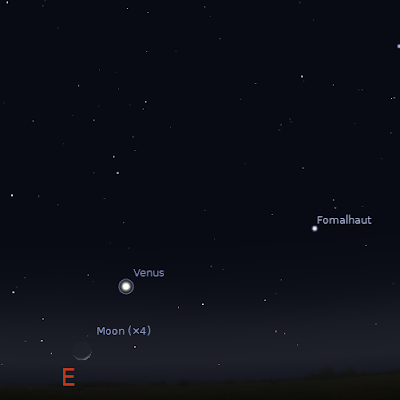 Morning sky looking east as seen from Adelaide at 5:30 am daylight saving time on Friday April 1 showing Venus in Aquarius, not far from the crescent Moon. Similar views will be seen elsewhere at the equivalent local time. Click to embiggen.

The New Moon is Monday April 4.

Bright white Venus is readily seen in the early morning sky. This week it is in Aquarius.

On the 31st of March and the 1st of April Venus is close to the crescent Moon. 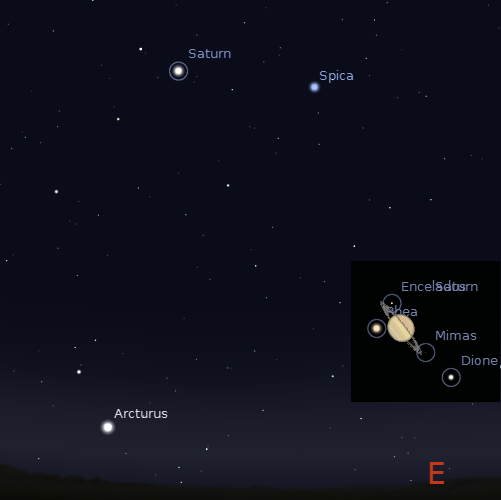 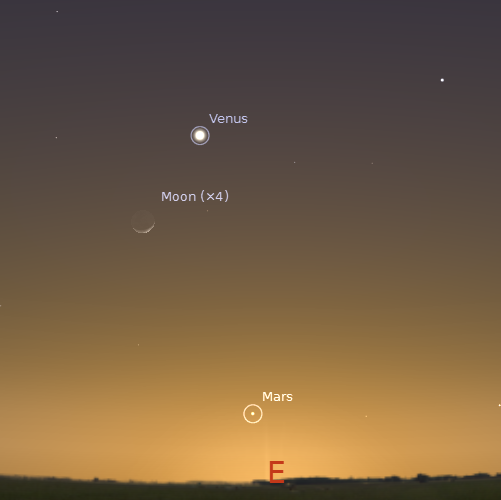 Mars returns to the morning sky by the 31st, faintly visible low in the eastern twilight.

Comments:
Visited Southern Hemisphere for first time last week. FAQ about early evening sky: There seemed to be a remote 'island' of milky way stars west of the Southern Cross... I have never seen such a thing. Was it indeed an island of milky way, or was I seeing things? Thank you. dwellsokc@cox.net

It's one or other of the Magellanic clouds, dwarf satellite galaxies of the Milky Way. See here for a quick map. They are pretty cool.

For some southern hemisphere guides with maps, see my page Southern Skywatch.

Don't Forget - Ancient Skies at Mawson Lakes Plane...
Semaphore Kite Festival 2011
And How Did Earth Hour Go?
Earth Hour 26 March 2011 - What can I see in the sky?
XKCD Nails It
I took an overdose of homeopatic sleeping pills - ...
In Adelaide - Ancient Skies at Mawson Lakes Planet...
Solar Activity vs Earthquakes
6th Globe at Night Campaign Revisited (March 24 - ...
Review of Stellarium 0.10.6.1