The Full Moon is Sunday March 20. It will not be the closest for 19 years. Jupiter is lost in the twilight. Venus is visible in the morning sky in the constellation of Capricorn. Saturn is well placed for telescopic observation and on the 20th the Full moon is close by. On the 21st the Moon is close to the bright star Spica. Earth is at Equinox on the 21st. 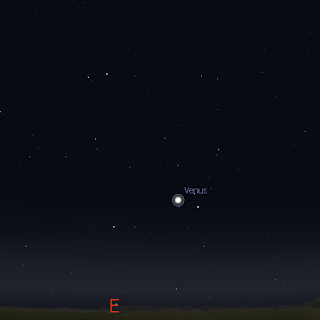 Morning sky looking east as seen from Adelaide at 5:30 am daylight saving time on Sunday March 20 showing Venus in Capricorn, not far from the bright star gamma Capricornii. Similar views will be seen elsewhere at the equivalent local time. Click to embiggen.

The Full Moon is Sunday March 20. It is at perigee, when the Moon is closest to the Earth, but it is not the closest perigee for 19 years. Earth is at Equinox on the 21st. 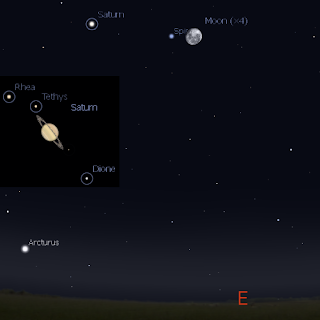 Evening sky on Monday March 21 looking east as seen from Adelaide at 11:00 pm daylight saving time in South Australia showing Saturn and the Moon near Spica. Similar views will be seen elsewhere at the equivalent local time.

Inset, the telescopic view of Saturn on the 21st (and on the morning of the 22nd), you will need a fairly large telescope to see any moon other than Titan. Click to embiggen.

Even in small telescopes you can see Saturn's rings and it's moon Titan. Titan is close to Saturn on the 16th.

The asteroid Vesta is quite faint (magnitude 7.6), so you need binoculars to see it and may need to watch over a number of nights to make sure you are seeing it. You will need to get up a bit before 5:00 am local daylight saving time when the sky is still very dark. You will also need good, steady binoculars or a small telescope, and to make sure your eyes are dark adapted, in order to see Vesta, but it will be worthwhile. Vesta is brightening and will be (just) visible to the unaided eye in a few months time.

Is the March 19th Full Moon an "Extreme Super Moon...
AAVSO Alert Notice 432 Now Up at Global Rent-aScope
Japan Faces it's Own Earthquake
Carnival of Space #188 is here.
March Highlights for Global-Rent-a-Scope Now Up
More on Microbes and Meteorites
Comet 2010 X1 Elenin: It's Just a Lump of Dirty I...
Sunspot 1166 Launches a Massive Flare
The Death of Pluto and the Birth of the Drake Equa...
Commentaries posted at Journal of Cosmology