The Sky This Week - Thursday October 28 to Thursday November 4

The "Blue" Last Quarter Moon is Saturday October 30. Mars is in the head of the Scorpion. Jupiter is easily seen in the evening sky. Comet 103P Hartley climbs higher in the sky. The variable star Mira is bright. 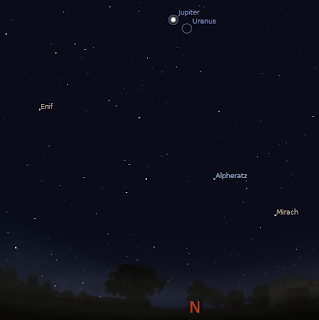 Evening sky looking north as seen from Adelaide at 10:30 pm daylight saving time on Wednesday October 29 showing Jupiter close to Uranus. Jupiter is just past opposition, but is still excellent in telescopes and binoculars. Similar views will be seen elsewhere at the equivalent local time. Click to embiggen.

The "Blue" Last Quarter Moon is Saturday October 30. A "Blue" Moon in modern usage is the second full Moon in a month, and we had a rare occurrence of two "Blue" Full Moons earlier this year. This month we have two Last Quarter Moons in one Month, so I have unilaterally decided to call them "Blue" too, as they are just as rare as the Full Moon type.
Jupiter rises before sunset, and can be readily seen from about 7:00 pm local time. Jupiter now spends most of the evening above the northern horizon.

Jupiter and Uranus are still close together and can be seen near each other in a pair of binoculars, although by the end of the week they will drift out of binocular range. Uranus is the brightest object within a binocular field north of Jupiter, and is in fact bright enough to be (just) seen with the unaided eye under dark sky conditions. A binocular spotters map is here. 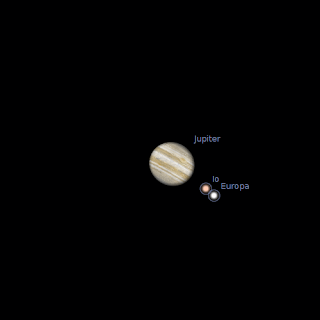 Jupiters' Moons are a easy to see whether you have binoculars or a telescope. Watching their eternal dance is always rewarding. The evening of Friday October 29 has a double eclipse event, with Io and Europa popping out of Jupiter's shadow close together (23:17 and 23:20, 29 Oct ACDST). 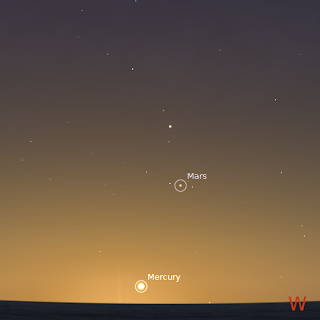 Bright white Venus is lost in the twilight.

Mars is distinguishable by its reddish colouring and is the second brightest object above the western horizon, after the red star Antares (which means Rival of Mars). During the week it draws closer to the head of the Scorpion, entering the head on Monday the 1st of November.

Mercury enters the evening sky by the 1st of November, it it is very low on the horizon and you will need something like a sea horizon to see it.

Saturn is now lost in the twilight.
The variable star Mira is very bright. Now that the Moon is waning, you can follow it's changes in brightness. 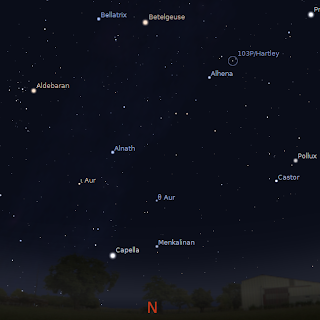 Comet 103P Hartley above the northern horizon at 4:30 am ACDST (3:30 non-daylight saving time) as seen from Adelaide on November, similar views will be seen from other places at equivalent local time.

Comet 103P Hartley 2 rises higher in the southern skies this week. It is now well out of the murk on the horizon, but the comet is fading, and will be between magnitude 5-4, seen as a faint fuzzy dot by the unaided eye. And you do have to get up at dark o'clock to see it. Unfortunately, at the beginning of the week, the waning Moon's light will wash out the comet.

The comet will be best seen from dark sky sites. Later in the week it will be easily seen in binoculars, and it races through the sky through some pretty territory.