The Southern Cross in Stereo 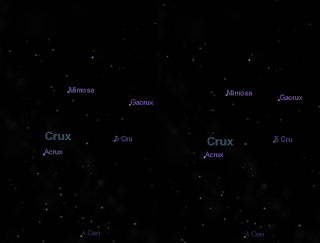 Space is big, very, very big. And the stars are very far away. Even though the stars are all different distances from the earth, they are so far away that they all look as if they are painted on a dome.

The get the same sort of change in perspective that we would get looking at ordinary objects if we moved just one meter, you need to move light years.

To demonstrate this, with the aid of Celestia, I've made a cross-eyed stereo image of Crux, the Southern Cross (the red-green anaglyph didn't give a strong stereo effect). Stare at the picture and cross your eyes until the x of Crux aligns, and the stereo version will pop out at you (you can click on the image to embiggen and get a higher definition view).

I made this by taking an image of Crux as seen from Earth using Celestia, then moved to Alpha Centuari A, 4 light years away, for the second image of Crux. Then I cropped and assembled the images in the Gimp for optimal stereo effect.

4 ligt years. For most objects, you can get perspective effets by hopping from one foot to the other, hopping 4 light years is a bit more difficult.