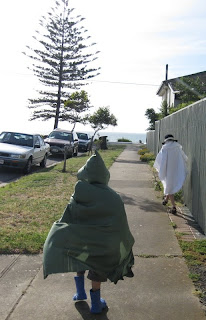 As I've written before (and here as well) celebrating All Hallows Eve (Halloween) doesn't make sense in Australia. The bright sunshine, the sparking sea, the complete absence of any darkling shadows or any Gothic gloom completely ruins the Halloween atmosphere.

Halloween has gotten bigger since we first did it in 2006. Probably because the number of families with small kids has increased. When this first started, there was about 6 kids in our group, going to people we had prearranged with, now there's about 20 kids in our pack going to two streets. The street over has it's own pack of treat hunting kids and worded up houses.

I did my science magic show for the kids. This time I had dry-ice pellets bubbling away turning Ph indicators different colours, dry ice blowing up balloons and the ever popular "sucking an egg into a milk bottle", using a pre 1970's milk bottle. 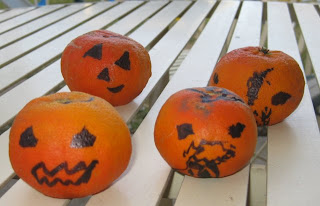 Jack O' Lanterns made from oranges.

Well, we got a huge hall of seewty things, people thought the kids looked cute (EldestOne was dressed as a Movie Director, although with the crtuches he didn't look so coll, MiddleOne wa a ghost (he's been one for the last 3 years) and SmallestOne was a BAT (he used the same costume to be Yoda and Frodo). The Bettdeckereerschnappender weisle made dragon's blood cakes and we all went for a BBQ and party at The Inventors place. 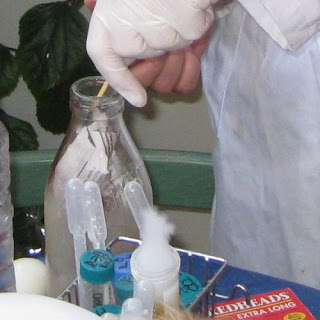 Science Magic Show, how not to set fire to the paper in a milk bottle for the "suck the egg into a milk bottle" trick.

Kids ran around and utterly failed to watch the DVD's that were being projected for them, while the adults ate far too much good food and talked into the night. I didn't even mind that the clouds came over and messed up any potential star gazing. Not a bad way to spend the evening and night.

Comments:
It's very odd, but the darkness, cold and general decrepitude of the American neighborhood (note spelling) really does lend itself to Halloween. I thought it was just a matter of media hype, but the kids really get into it over here [I was in DC a couple of days ago, and went to a Halloween party].

Say hi to your family, and tell Eldest One that crutches can be lethal when used in the right way, as I found out when I was his age...