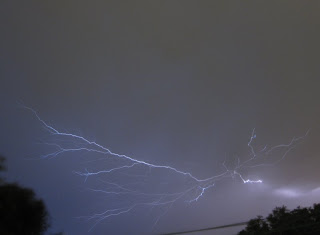 Lightning flash seen from our backyard at 8:30 pm (click to embiggen).

We hit a record today, the hottest November day since records began (43 degrees Celsius in the city, it was hotter elsewhere). This after a long string of 35 plus days. We are still officially in spring, temperatures like these should not happen until late January early February.

Today going outside felt like being dropped into a blast furnace. Walking up to the Science Communicators event my eyes felt like they were being peeled. Driving home from the event we saw a wall of dark heading towards us. We drove into the oncoming storm with the clouds glowing eerily from the setting sun. We drove along the beach accompanied by flashes of lightning, which put on a spectacular display over our house. I only captured one of these terrific blasts.

Typically, we only got a few drops of rain out of all the drama, and the teperature is now a chilly 33 degrees Celsius.