The Last Quarter Moon is Tuesday November 10. Jupiter is is easily seen as the brightest object in the evening sky. In the morning, Mars is easily seen above the eastern horizon and is near the Beehive cluster. On Monday 9 November Mars and the Moon are close. Saturn is close to the dawn horizon. The variable star Mira is at maximum and Algol is at minimum. 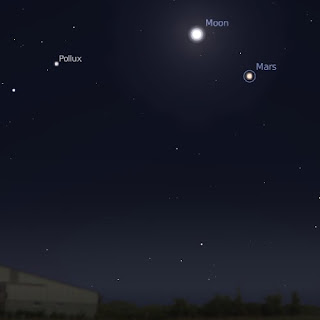 Morning sky looking north-east showing the Moon and Mars near the Beehive cluster at 4:00 am local daylight saving time (3:00 am non-daylight saving) on Monday November 9. Click to embiggen.

In the morning, Mars is readily visible in the eastern sky. Red Mars is in the constellation of Cancer and starts the week near the Beehive cluster. This will be readily visible to the unaided eye under dark skies, and will look quite nice in binoculars. On Monday November 9 the waning Moon is close to Mars, with the Beehive in between.

Saturn is low in the morning sky this week. 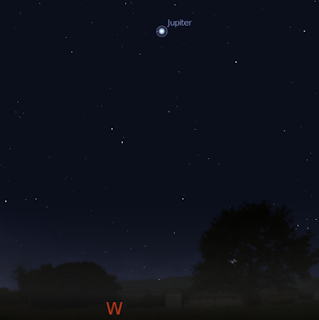 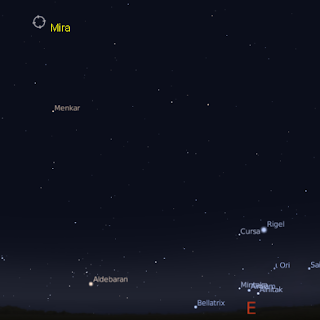 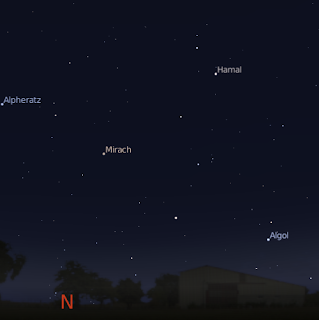 Mira (omicron ceti), a star in the constellation of Cetus the whale, is a long period pulsating red giant and changes brightness from below naked eye visibility to a peak of round magnitude 2 (roughly as bright as beta Crucis in the Southern Cross) in around 330 days. Mira peaks in brightness in November around November 10. It may be seen above the eastern horizon around 10 pm local daylight saving time above a loop of stars just above Taurus (see above, Mira is not shown as the plotting software only shows the minimum).

Algol is another classic variable star, but is usually hard to see from the southern hemisphere. This week we have a chance to see Algol dim and brighten under reasonable circumstances. On November 5th at 11 pm AEDST Algol will be at its dimmest (barely visible, unlike the diagram which shows it at maximum), over the next few hours you can watch it brighten.

Southern Skywatch November 2009 edition is now up!
One Picture, Three Comets
Why Halloween Doesn't Work in Australia (Part II)
A Ring Around The Moon
Moon over Mum's House
Yeah, so not much is happening here.
Carnival of Space #126 is here.
The Sky This Week - Thursday October 29 to Thursda...
This Mornings Orionids
Carnival of Space #125 is here.