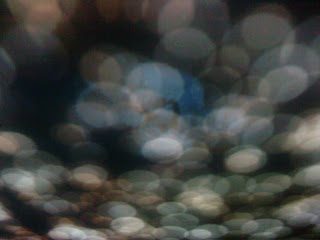 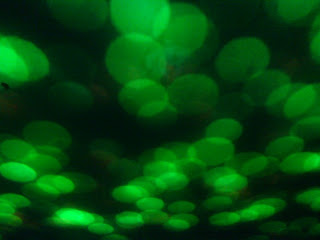 The inaugral meeting* of the Adelaide branch of the Australian Science Communicators was a hoot. Held in the Royal Institute Australia's newly refurbished home in the old Exchange Building, Rob Morrison did a demonstration of the science of wind instruments called "Taming the Raspberry" (the kids, who did not want to come as this would interrupt their TV watching, enjoyed this immensely). Afterwards the structure of the reformed branch was discussed, and I put my name forward as a potential council member (I'm going to pay for this, I know). Then we got a tour of the Old Exchange building, saw the old chalkboards with the stockprices as they were in 1991, saw presentation on the Bragg's (Adelaidiean scientists) that had one of the Bettdeckererscnappenden Weisle (BDEW)'s fellow choir members playing Laurence Bragg.

After pausing to admire the amazing leadlight window, we entered the basement where the science themed artworks are displayed (all this is open to the public by the way). The BDEW got to try out the interactive Heart Library Project, where your heartbeat is converted to differently sized and moving coloured dots. The BDEW was a cool calm blue-green, while MiddleOne was an active red/orange. Unfortunately, under kiddy pressure we took our leave before we could mingle and "network" (I hate that term), and drove into the oncoming storm.

The Adelaide Science Communicators will meet once a month, and I yhink some of the proposed events for 2010 will be great!

UPDATE: Mike Seyfang writes: I had promised Rob I would podcast his talk but the audio recording failed spectacularly.

Managed to get one very blurry image and a tiny snip of lofi video from my phone tho...

*Actually, its a relaunch, there was a branch some years ago but it faded out.

Comments:
I was at that event! Hoping we can convince RiAus to make it easier to bring science to people online via blogs, podcasts etc...

I had promised Rob I would podcast his talk but the audio recording failed spectacularly.

Managed to get one very blurry image and a tiny snip of lofi video from my phone tho...

Cheers and thanks for posting about the event.

I added some blogging ideas to the events sheet that they sent around, and it looks like they are interested in web-based and social media type approaches. They just need someone to do it.

See you at the December meeting.

Free Astronomy Talks in Adelaide Nov 19-Dec 10, 2009
The ISS shoots the Moon
Carnival of Space #128 is here.
Leonid Meteor Report, Wedensday November 18, 2009
Waiting for Meteors
The Sky This Week - Thursday November 19 to Thursd...
Don't forget the Leonids.
Saturn and the Moon
Eggshells in Vinegar (experiments with kids)
The Heart of the Milky Way, from New Zealand