Occultation of the Pleaides, December 1, 2009 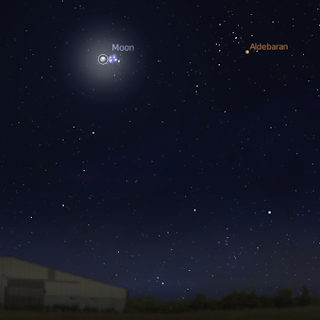 North-eastern horizon as seen from southern Australia around 10:00 pm local daylight saving time on December 1. Northern Australia and much of Indonesia will see similar views at around 9:00 pm local standard time. The Moon is poised to cover some of the stars in the Pleiades cluster.

On the evening of Tuesday December 1 the nearly full Moon will pass in front of the beautiful Pleiades star cluster. This event can be seen from Australia, Indonesia, Malaysia and Singapore and parts of Japan. Detailed timings for SE Asia in Universal Time can be found via this link (and see below).

Because the Moon is so bright, it will be best to watch this event with binoculars or a small telescope. Set up and start watching 30-15 minutes before had so you don't miss the disappearance. 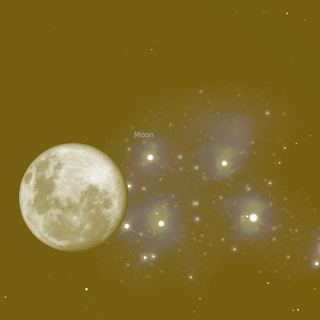 Binocular view of the beginning of the occultation as seen from the Northern Territory. Celeano and Taygeta are just about to be covered. You will not see any nebulosity because of the Moons brightness, I just can't get the software to make it go away.

In Australia, the Northern Territory has the best view. Darwin sees the most bright stars covered, starting with the bright star Celeano at 21:51 ACST, followed by bright Taygeta, then Sterope and Maia, finishing 23:27. next best is Alice Springs, which sees Taygeta covered at 22:12 ACST, followed by 18 Tauri and Sterope. 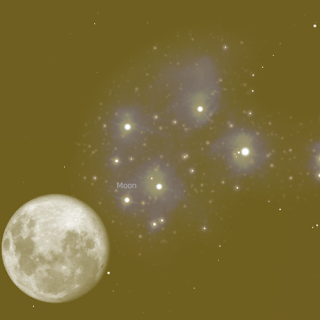 Binocular view of the beginning of the occultation as seen from South-eastern Australia, just before 18 Tauri is covered up..

South eastern Australia sees just 18 Tauri covered, starting from 23:28 ACDST (Adelaide), 23:33 AEST (Brisbane) and the morning of December 2 for Sydney, Canberra, Melbourne and Hobart, from between 00:11 AEDST to 00:26 AEDST.

Sunset on Mars, or is it?
More Evidence of Life on Mars
Don't Know Whether to Laugh or Cry
Southern Skywatch December 2009 edition is now up!
Enceladus's plumes in 3D
No Algol for me....
Algol Blinks, November 25-26
Carnival of Space #130 is here.
The Sky This Week - Thursday November 26 to Thursd...
Sean Carroll Talks Times Arrow