Don't Know Whether to Laugh or Cry

From a letter to the Adelaide Advertiser of Friday, November 27.

"Before I went to the Antarctic Peninsula in January 2000 there was great public concern about the hole in the ozone layer growing like a mushroom, [...] Ukrainian scientists who have monitored the hole for 9 years have found little change if any in that time. So much for the scare mongers. "

Umm, that would be because we spent over 20 years hammering out international treaties to stop production and release of CFC's and other ozone depleting gasses, and spent truck-loads of cash developing ozone friendly alternatives to CFC's so we could still have refrigerators when we stopped making/using CFC's. What did the correspondent think all the "CFC-free" stickers on aplliances were for? While we have succeded in reducing ozone depleting chemicals through this massive international action, ozone levels are not expected to recover to 1980 levels until around 2068.

See here for a general history of the ozone hole and our understanding of it, and here for a graph that shows ozone has indeed stabilized, at exceptionally low levels. 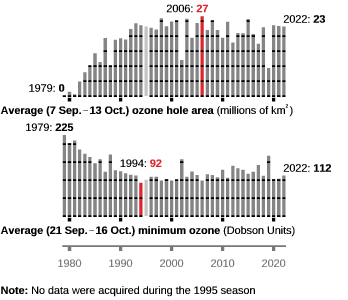 Image Source NASA.
Yes, the ozone hole has stabilized because we did something about it.

Comments:
Exactly what the anto-vaxxers are so hung up on now, people have forgotten how serious the diseases were compared to the miniscule risk from the needle. It's a never-ending battle to keep people informed.

Southern Skywatch December 2009 edition is now up!
Enceladus's plumes in 3D
No Algol for me....
Algol Blinks, November 25-26
Carnival of Space #130 is here.
The Sky This Week - Thursday November 26 to Thursd...
Sean Carroll Talks Times Arrow
Unexpected Rainbows (Part 7)
By Jupiter!
The Crescent Earth from Rosetta