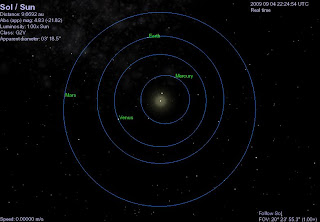 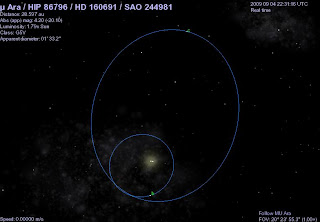 The 373 exoplanets we have discovered so far are a strange bunch. Mostly way larger than Jupiter, around 40% scream around their stars closer than Mercury orbits our sun. This is probably mostly due to detection bias, as we find most of the exoplanets by detecting tiny (really, really tiny) wobbles in their parent stars orbits. Detecting a planet of Jupiters size in Jupiters orbit would take many years of close scrutiny. As well as the sizes and locations, many of the exoplanets have strange (at least from our perspective) orbits. All planets have eliptical orbits. But while in our solar system most of the plants have orbits that are quite close to circular (see image top left) many extrasolar systems have orbits that are far more eccentric, almost cometary (see the system for Mu Ara above right) 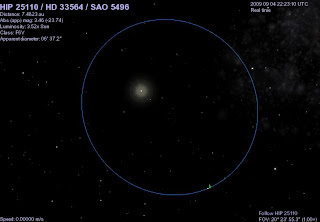 Now, the weird orbits may be a result of how the super Jupiyters get close to their stars. We believe that latge, Jupiter -like planets form far from their stars, and then migrate in by interaction with other planets (Hot Jupiters have probably ejected any Earth mass planets from the stars equivalent of the inner solars system).

This series of cosmic billiards may leave the hot Jupiters with very elongated, comet like orbits.

However, as for most of the planets, we are inferring the orbits from tiny wobbles, there may be some error in deriving these orbits, especially for orbits of single planets that are only mildly eccentric (see HIP 25110 above). A recent paper suggests that the gravitational tugs of unseen companions to known exoplanets could make their orbits appear more elliptical than they really are. The authors used a simulation where they generated a range of exoplanetary systems containing roughly equal numbers of single and double worlds. They then looked at the distribution of eccentricities in this simulated sky, and gfound that it matched the real distribution of eccentricities.

So what does this mean? It means that on average, about 4% of the known single exoplanets have unseen compaions. For single exoplantes with modest eccentricities, this probability is higher, around 12-16%.

So or solars systm is still unusual, but a little less unusual now,

Comments:
You seem to be using a very old set of parameters for the Mu Arae system there... the current datasets yield a system of 4 planets in fairly low-eccentricity orbits. Might be worth updating your Celestia datafiles (version 1.6.0 was recently released)...

Yeah, I'm using the 1.5.x files, but the high eccentricity orbits are illustrated in wikipedia, so I thought I'd use that. Still this nicely illustrates my point (now I have to dig out the Mu Ara orbits). Thanks for the heads up.

Congratualtions Rob McNaught
Fear and Loathing in Vaccine Denial
Vaccine Fears and the Whooping Cough Epidemic
Ice in Space turns 5!
A Martian Sunset
Carnival of Space #118 is here.
The Sky This Week - Thursday September 3 to Thursd...
Southern Skywatch September 2009 edition is now up!
Double Moon and Mars, it's a Hoax
Fog Alert on Titan