The First Quarter Moon is Thursday August 27. Mercury is easily visible in the evening twilight, while Saturn is soon lost in the twilight. Jupiter is visible the whole night and is easily seen as the brightest object in the sky. In the morning, Venus and Mars are seen above the eastern horizon before dawn. Mars is close to the open cluster M35 August 28-30. 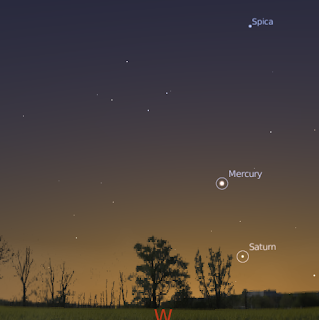 Saturn is visible in the early evening twilight just above above the north-western horizon. During the week it becomes more difficult to see as it lowers into the twilight. Saturn sets before 7:00 pm local time, making telescopic viewing of Saturn extraordinarily difficult.

Jupiter is visible the whole night and is easily seen as the brightest object in the sky. While Jupiter is past opposition, where it is biggest and brightest as seen from Earth, it is still more than big enough to be appreciated in even the smallest telescope. If you don't have a telescope to view Jupiter, why not go to one of your local Astronomical Societies or Planetariums open nights? Jupiter's Moons are readily visible in binoculars or a small telescope. On Thursday August 30 Jupiter has an interesting alignment of Moons. 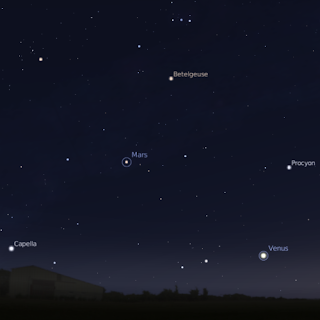 Mars, Venus, Aldebaran and Hyades at 6:00 am local time on Friday morning August 28, click to embiggen.

In the morning, Venus and Mars are readily visible in the eastern sky. Red Mars (which will not be as big as the full Moon this week) is below the the constellation of Orion and forms a elongated triangle with two bright red stars Aldebaran and Betelguese in Orion. Between August 28-30 Mars is close to the open cluster M35. This meeting is best viewed with binoculars.

Printable PDF maps of the Eastern sky at 10 pm, Western sky at 10 pm. For further details and more information on what's up in the sky, see Southern Skywatch. Cloud cover predictions can be found at SkippySky.

Big Aussie Starthunt Extended.
Pluto and Science Literacy
Carnival of Space #117 is here.
And Now the Morning Sky from Mars
And As Saturn Slowly Sinks in the West
Another Carnival
Carnival of Space #116 is here.
I've Done My Starhunt, Have You?
The Sky This Week - Thursday August 20 to Thursday...
Venus Visits the Moon