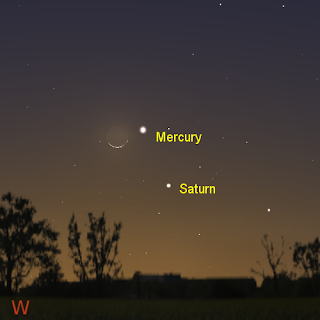 Mercury is now easily visible in the western evening twilight. Mercury rises rapidly in the sky, meeting the crescent Moon on the 22nd (see diagram left).

Saturn is visible in the early evening and is difficult to see just above above the north-western horizon, Mercury is now brighter. Saturn sets before 8:00 pm local time, making telescopic viewing of Saturn difficult. However, Saturn's rings are nearly edge on now, and are currently invisible from Earth, making the effort worthwhile.

Jupiter is easily seen as the brightest object above the eastern horizon from around 6 pm local time (and indeed in the sky for the entire evening). Jupiter is past opposition, where it is biggest and brightest as seen from Earth, but is still more than big enough to be appreciated in even the smallest telescope. If you don't have a telescope to view Jupiter, why not go to one of your local Astronomical Societies or Planetariums open nights? Jupiter's Moons are readily visible in binoculars or a small telescope. On Sunday August 23 Jupiter has an interesting alignment of Moons. 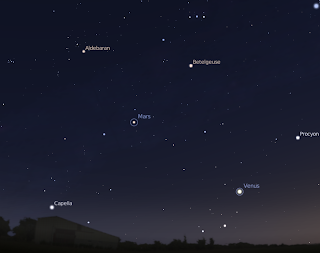 In the morning, Venus and Mars are readily visible in the eastern sky. Red Mars (which will not be as big as the full Moon this week) is below the A-shaped Hyades cluster and forms a triangle with two bright red stars Aldebaran and Betelguese in Orion. Bright white Venus is now close to the horizon, but is still readily visible in the dawn twilight.

Printable PDF maps of the Eastern sky at 10 pm, Western sky at 10 pm. For further details and more information on what's up in the sky, see Southern Skywatch. Cloud cover predictions can be found at SkippySky.