And Now the Morning Sky from Mars 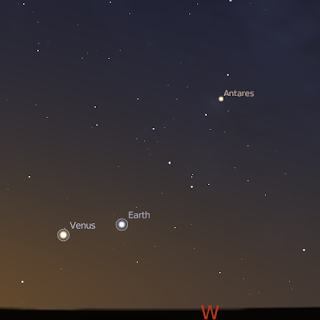 Venus and Earth as seen in the Martian sky on June 29, from a latitude equivalent to Adelaide, as rendered in Stellarium.

Sometime back in July the Lounge of the Lab Lemming posted a shot of Earth, Venus and Mercury as seen from the surface of Mars, rendered in Celestia. Celestia has long been the premier program for seeing the Solar system (ours, or any other one that we have discovered) from different points of view. I've done a few conjunctions from the surface of Mars in Celestia myself (see here and here).

However, getting to a consistent spot on a planetary surface and looking up with Celestia is a right pain. I have a script that lets me do it which can be modified as need be, but it still requires a bit of mucking around.

But now Stellarium 10 comes with the ability to set your observing station on Mars, or any other planet or object that is in the Stellarium planets/asteroids/comets list, even ones you have entered yourself. Just click on the location icon in the lefthand side bar (the one that is annoyingly hidden until you move the mouse over to the left, or press F6 to call up the location dialogue choose Planet (and Mars) then you have to go to the sky and viewing options dialogue (F4), then choose the Landscapes menu and choose Mars (otherwise there are trees incongruously on the surface of Mars) and Robert is your avuncular relative.

Celestia will still be the premier visualization program for seeing the sky from asteroids, satelites and exoplanets, but seeing conjunctions from the surface of Mars just got easier.

I'm using Windows Vista, and for some reason, Stellarium 10 does not work on my computer. Every time I try to install it, I get an error message. Stellarium 9 seems to work fine. Do you have any idea why this is?

I enjoy using my planetarium software to look back at the Sun from other stars ... one thing I like to do is try to imagine what constellation the Sun might be part of if the aliens invented astrology.

I use Starstrider, though, not Celestia.

And As Saturn Slowly Sinks in the West
Another Carnival
Carnival of Space #116 is here.
I've Done My Starhunt, Have You?
The Sky This Week - Thursday August 20 to Thursday...
Venus Visits the Moon
Saturn and Mercury Catch Up
Red Triangle in the Morning
Mercury meets Saturn August 17 2009
The Big Aussie Starhunt Starts This Saturday!