Blogging the Starry Messenger - The Stars 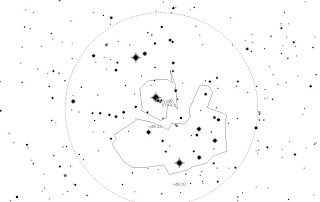 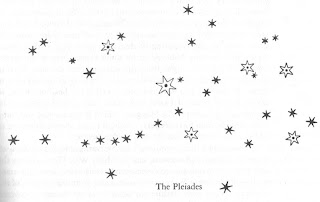 Comparing Galileo's chart of the Pleiades with a modern chart. For a chart drawn using a fairly ordinary (by modern standards) telescope with chromatic and other aberrations, drawn by hand and the made into a woodcut, it's pretty accurate (scaling between the images is different, sorry). The small stars in Galileo's diagram represent stars never before seen by humans.

Galileo's audience would be reeling after the revelation that the Moon was not a perfect object. His next shock would not be as great, but would still have an impact. There were far more stars in the heaven than could be seen with the unaided eye.

The issue was not merely that these things were new discoveries, but that they struck at the very heart of Aristotelian cosmology, which was in turn a major prop to the Ptolemaic solar system. These observations laid the foundation for the fall of the Ptolemaic system.

Galileo spends a lot of time describing the appearance of the stars through the telescope. Again, the words sound strange to us today, as he tries to describe effects we know as largely due to atmospheric turbulence, but he was showing that, unlike the planets, the stars showed no, or very small, visible disks.

When stars are viewed by unaided natural vision, they present themselves to us not as of their simple (and so to speak their physical) size, but irradiated with a certain fulgor and fringed with sparkling rays, especially when the [darkness of night is] far advanced.

Once he has established that stars appear brighter in the telescope, but not bigger, he goes on to describe the multitude of stars he can see. He then maps out the previously observed stars along with the new stars in the belt of Orion and the Pleiades, showing that there are over 10 times more faint stars than ones seen with the eye. He then scrutinises the Milky Way, and shows that this is made of large numbers of faint stars. Finally he turns his telescope to certain features called Nebula (not the same as our moden nebula), and shows that these too (the Nebula of Orion and the Nebula in Paraesepe) are composed of multitudes of faint stars. Actually, Orion's Nebula does have a proper nebula in it, but it is unlikely Galileo could have seen it with his instrument. Again, given the primitive nature of his instrument, and the circumstances of making his observations, the star maps he makes are surprisingly accurate.

Still Galileo had an even bigger surprise waiting in the wings. Planets no one had ever seen before. Next week, we look at his section on the Moons of Jupiter.