Blogging the Starry Messenger - The Moon

Having described the telescope, Galileo then turns to describing the Moon as seen through his new instrument. This section shows the puzzlement, if not the initial incomprehension, Galileo had when he first viewed the Moon at magnification.

We are used to the idea of craters and mountains on the Moon, but when Galileo first looked, the accepted idea was that all celestial bodies were perfect. The dark splotches so prominent to our unaided eye view were explained in various ways that left the Moon a perfect, unblemished sphere. 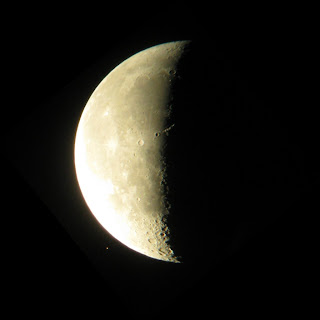 Now, Galileo more than most was in a position to realise that if the Earth was a planet, as Copernicus thought, then all planets, such as the Moon, might have features similar to those on Earth. But also recall this was the first time a world had been viewed from such a perspective, with a telescope of roughly 15x magnification, with lenses that had spherical and chromatic aberration, and without our fancy telescope mounts.

Given all this, it is a wonder that Galileo was able to describe and sketch the Moon as he did. Reading his account, you can almost hear the gears in his head grinding as he tries to make sense of the patches of light and dark revealed by his telescope.

First he briefly describes the light and dark patches that people knew for millennia from their nightly views of the sky. Then he goes on to describe things no one has seen before:

On the fourth or fifth day after new moon, when the moon is seen with brilliant horns, the boundary that divides the shaded part form the lighted part does not uniformly run along an oval line, as would happen on a perfectly spherical solid, but traces out an uneven, rough and very wavy line as shown in the figure below. Indeed, many luminous projections extend beyond the border into the darker part, while on the other hand some dark patches invade the illuminated part. Moreover, a great multitude of small scattered dark spots, entirely separated from the dark region, are scattered almost all over the area illuminated by the sun, excepting only that part occupied by the large and ancient spots [the large dark patches that can be seen with the unaided eye IFM]

Let us note particularly that the said small spots agree always in having their darker parts directed towards the sun, while on the other side, opposite the sun they are crowned with bright contours, like shining summits.

Slowly, painstakingly, Galileo describes the effects of sunrise, the appearance of the Moon during different phases. You can see him trying to build a picture of a world that has never been glimpsed before. He also had to convince his audience that what he saw was not mere illusion, an artefact of the telescope. This was not so absurd as it seems to us today. Telescopes were new, and did suffer from chromatic and other aberrations (and even today internal reflections can generate phantom objects). Still, as you can see from one of Galileo's illustrations compared to a modern photograph, for a hand held 15x instrument, he did quite well in accurately depicting the Moon's features (the big crater is today known as Albategnius, it's size is exaggerated due to issues in producing the woodcuts that made the illustrations for the Staryy Messenger).

Galileo did more than just describe. He used geomtery to show that these objects must have sustantial size, and indeed were towering mountains. Some of his explanation seem a bit strange to us today, such as positing an atmosphere to the Moon to explain why you can't see peaks and ridges on the limb of the Moon (rather than it being mostly an effect of our eyes being unable to resolve these small features). Still by the end he has convince at least me that the Moon is not a prefect cellestial sphere, by a world that can be compared to our own.

That the Moon was a world was quite a subversive notion, and part of the process of demolishing Aristotilean physics neccescary fro acceptig a heliocentric system. If the Moon is a body like Earth, and not a special cellstial object, then Earth can be a planet just like the others, and not be placed in a priveleged postion.

If a non-perfect Moon was a shock, Galileo had more shocks waiting. Next week, we look at his section on the stars.

Very interesting. It's a pity the articles have so many typos. I offer proofreading.