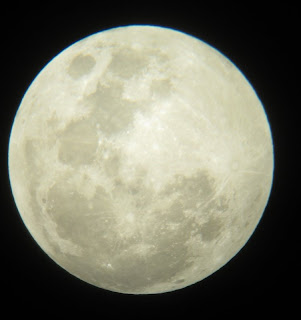 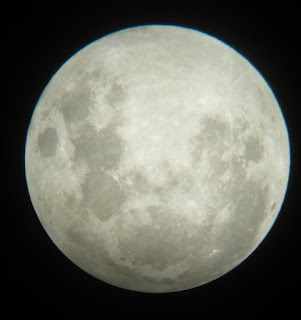 Left Image, Moon at 11;00 pm ACST, 9 February, just before the Moon entered the Earth's penumbra. Right image, the Moon at 1:00 am 10 February at maximal shadow immersion. You can see the subtle shading at the bottom (north) of the Moon. This was much clearer to the eye (both unaided and through the telescope), that it is in the image. The left hand image is yellower because the Moon was lower to the horizon and had thin cloud cover over it.

After all the cloud that was about Monday and Tuesday, I thought I wouldhave no luck with the eclipse, but the clouds cleared the horizon (except for some thin haze early on) in time for the eclipse. Being a penumbral eclipse, where the Moon enters the outer part of Earth's shadow, the darkenng was slight, and only really observable in the later part of the eclipse, but very definitly there. It was beautiful, and I'm glad I stayed up to see it.

I also got to see saturn too for the first time this year. Floating with its rings edge on, Titan just beyon the rings. Beautiful too.

The images above were taken with my Canon IXUS on automatic with the flash turned off, held to the 20mm eyepiece of my unguided 4" newtonian.

Fantastic Images of the Titan Transit
Sheer Stupdity
The Fires From Space
Carnival of Space #89 is here.
Bushfire Disaster
Comet Lulin in Libra
The Winners of the "Sketching the Sky" Competition
Penumbral Eclipse of the Moon (9-10 February 2009)
Transit of Titan
The Moonand Venus on New Years Eve (a Blast from t...