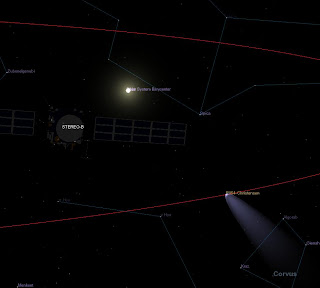 This image is comet C/2003 K2 (also designated C/2008 X4) Christensen as seen from the spacecraft STEREO B on December 8. This comet was recently recovered by Comet Al from images taken by the STEREO B spacecraft on that date.

I made this image using the 3D space simulation program Celestia. If you would like to do something similar, I have created .ssc files for the two stereo spacecraft which can be obtained here. and an .ssc file for C/2003 K2 (C/2008 X4) using the latest orbit data (.ssc here, latest orbit data here). The comet is designated 164P-Christensen, and can be found in the solar system browser (or search on 164P).

Just download these files into the extras folder of Celestia and you are ready to go (despite the comet only being magnitude 10, Celestia exagerates the comets tail and brightness, it does this for all comets around perihelion, but it makes them easy to find). You can get a whole passel of comet orbitals from the Celestia motherlode comet section, but be aware that the 164P-Christensen obits here are the old, pre-recovery orbits (also, if you load in the full catalog of comets, they sky will be taken up by comet orbits, best to use that as a resource to extract comets as you need them).

Celestia is not just a pretty picture maker, but by using it to view the sky form the point of view of the STEREO spacecraft, you can use it to identify objects seen in STEREO pictures, as the POV of the spacecraft mneans the objects will be seen in differnt lcoations to eath based planetarium programs.