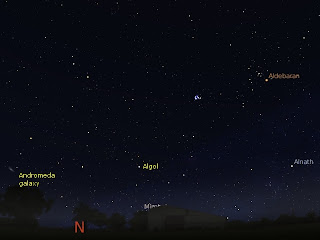 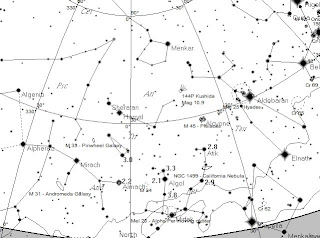 The northern horizon as seen from about Sydney's latitude, at 9:35 pm AEDST on 16 December. The brightness of Algol at maximum and that of surrounding star for comparison are shown in the black and white map. Click on the images to enlarge.

Algol is one of the classic variable stars, unlike the red giant Mira which changes brightness through its expansion and contraction, Algol is an eclipsing binary. The bright star has a dimmer companion which passes in front of it just short of every three days causing the star to appear to "blink" (if dimming over 5 hours is a blink). No wonder the stars name means ‘Blinking Demon”.

Algol is very difficult to see from the southern hemisphere, it is below the horizon for a good chunk of the year, and even when it is visible, it is very low to the horizon. This means the times to observe Algol dim are few from the southern hemisphere. However, in the next week there are two good opportunities to see Algol "blink", on the 14th (13th in WA) and 16th of December. 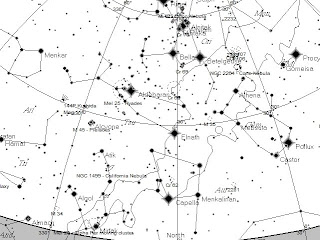 Algols first good minima is on 13:55 Universal Time on the 13th, in Western Australia this is 10:55 pm AWSDST, on the 13th, in Central and eastern Australia this is on the morning of the 14th at 00:25 am ACDST and 00:55 am AEDST. At this time however, Algol is only around a handspan and a half above the northern horizon in Sydney (less in places south, more in places north) , so you will need a fairly level, clear horizon to see Algol (see chart to the left, which if for Sydney at 00:55 am AEDST). In Perth Algol is around two and a half handspans above the horizon and almost due north, so WA folks will have better views. This is the night of the Geminids, so if you are up watching for meteors, you can watch Algol dim and brighten.

The next minima is on the 16th at 10:44 UT which is 7: 44 pm AWDST in WA, before sunset. So WA folks miss out. However, in Central and Eastern states it is 9:14 pm ACDST (after civil twilight) and 9:44 pm AEDST (astronomical twilight). The charts for this are at the top of the page. At this time you will miss the dimming, but can easily watch Algol return to brightness.

The total "blink" time (from start of dimming to minimum brightness then back to full brightness) is 10 hours, but you can easily see Algol rapidly change in brightness over an hour or so. At minimum, Algol is as bright as the dim star immediatley above it. You can use the magnitudes shown in the finder chart above to keep track of Algols dimming or rise as outlined in the post about Mira.

So when you are out and about, keep and eye on Algol and you may see it blink!

Jodcast for Decemeber is Now Up
Carnival of Space #82 is here.
Here Come the Geminids!
Watching Mira Brighten - Record Your Observations.
Echos of Anchient Light - Tycho Brahe's Supernova ...
Meteor Pieces Recovered from Alberta Meteor
The Moon, it Moves!
And the Moon, Venus and Jupiter are still lovely.
The Day After: Still More Moon, Jupiter and Venus
Night of the "Smiley Face Fritz" Link Fest