The Moon has been hopping in an out of clouds all night. At one point there was a fantastic Moon bow around the Moon, but just as I got the camera set up it went away. 20 minutes to go, and there is only a minor likelihood I'll get any shots at all.

Update (well you have probably seen the new post anyway), didn't get any shots of the occultation with the webcam (sigh), but not because of the weather. Here is the Moonbow and a shot of Antares well before occultation). 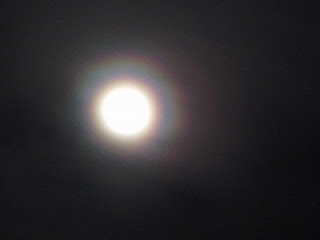 Moonbow (as always, click to enlarge). The Moonbows came back several times over the evening, this is probably the best image I got (the ring is unsymmetrical because the cloud was thinner at the edge). The whole thing was crisper an clearer by eye, but this shot does actually convey a good sense of the colours I could see, you can vaguely see the second coloured ring, and Antares is the dot below and left of the overexposed Moon. 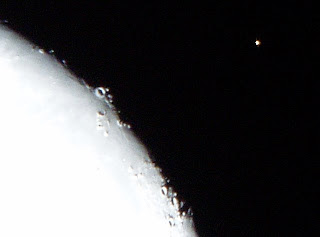 Antares gets closer to the Moon. This was taken via the lens with my Olympus digital camera. If I had set the webcam up then I might have caught the occultation. But as I said, clouds came over and I was worried by the possibility of rain, so I held off, thus missing out on the event itself.

Still, this shot isn't bad for a camera just held to the lens.