The Advertiser's War on Science II 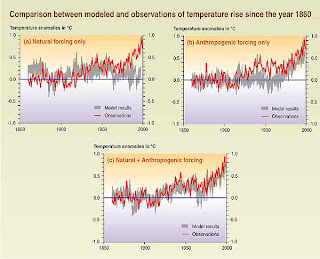 Chris Kenny has another column on climate change in this weeks Adelaide Advertiser. Unfortunately, once again he fails to understand the science (or how science works)

Look at the graph to the left, then read this quote from Chris Kenny's column.

It is also a fact to say that the climate is always changing. And that no one has yet proved a link between human activities and/or carbon emissions and climate change. Sure, there are theories and models, some of which are widely respected. But there is no proven science.

I'll say this again, proof is for mathematics and whisky, science is about evidence (inference to the best explanation if you want to be technical). And what the heck is "proven science"? We collect evidence for or against specific hypotheses, we don't try and prove science (fans of Popper and Kuhn can go duke it out somewhere else). Evidence, collected by imperfect humans using imperfect instruments.

Science can almost never produce 100% certainty. We're 100% certain that earth is an oblate spheroid, and that Earth orbits the Sun, everything else comes with error bars. Small error bars in many cases, some aspects of general relativity have been measured to better than one part in a billion (that's really accurate), but error bars nonetheless. This is pounced on by many like creationists, HIV-denialists and anti-vaccinationists. To them, any degree of uncertainty means that the whole enterprise is discredited, and their brand of nonsense is more valid.

Things like biology and climate rarely have the nice, tight error bars that physics (mostly) gets (ask me about lysophosphatidic acid receptors and neurite growth some time), but we do have evidence. In the case of climate change, multiple forms of evidence, from actual temperature changes, to changing flowering patterns, to changing migration patterns to rises in sea level. To interpret this evidence we use theories and models. ALL science uses theories and models to interpret evidence (like the germ theory of disease), disparaging theories and models means you don't understand science.

And sometimes we have to act when our understanding is less than complete, John Snow did not wait until he had near prefect understanding of disease transmission, or even had a germ theory of disease, before getting the Broad Street Pump replaced during a cholera epidemic. Our understanding of climate change is imperfect, but we know that the climate is warming, and most of it is due to human activities. This is solidly based in physical law, you put more carbon dioxide into an atmosphere, it will retain more heat, this is high school science class stuff.

People are scorned as "deniers" simply for pointing out the scientifically agreed fact that Earth has not warmed for a decade.

First off, it is not a "scientifically agreed fact" that Earth hasn't warmed for a decade (see my original post), the earth hasn't stopped warming, no matter whether you use the GISS, Hadely or RSS databases, temperature is still going up. Climate scientists are in fact united in saying that the world has not stopped warming.

A good overview of climate change can be found at Steven Schneiders Climate Change pages. See also Did Global Warming Stop in 1998?, Global Trends and ENSO , and Wiggles.

Comments:
Oh my, you have totally lost the point.

As a scientist, your job is to obtain the raw data and evaluate.

You have failed to become a scientist, when you get upset and attack anyone that fails to agree with your current theories.

Yes, I am taking names!

I hoped that you were smarter than this.

Now, I must worry if anything you say about astronomy can be trusted.

1 Definition
1.1 What is an Extraordinary Claim?
1.2 What is Extraordinary Evidence?
2 Rationale
3 Examples of Application
4 Related Articles
5 References

Often attributed to the noted astronomer and science author Carl Sagan, this epigram simply states that unusual and implausible claims should be looked at with a particularly skeptical eye and that the usual standards of "scientific" proof should be tightened before such a claim is accepted.

What is an Extraordinary Claim?

Although there is no formal definition, in practice, an "extraordinary claim" is any claim that is inherently very improbable, and usually would violate well-established norms of science and scientific understanding. Claiming to have discovered a new species of beetle, for example, is not especially extraordinary, while claiming to have discovered a species of fire-breathing dragon would be.

What is Extraordinary Evidence?

The normal standards for scientific "proof" are often quite relaxed; for example, the standard p-value required of published papers is usually 0.05 (5%), meaning that about one experiment in twenty may spuriously achieve this level of "success." However, as the experiments (and their implications) become more and more important, it becomes critical to confirm the proofs before acting on the implications, simply because the claims themselves would require such a wholesale revision of science, technology, and philosophy.

The idea that one should examine "important" things more closely is in many ways simple common sense. For example, many people who will buy a T-shirt without bothering to try it on will make sure to do a test drive of a car or have a house inspection before purchase. Similarly, people are more likely to accept without question statements that they find plausible—you might believe that I am late for work because of a flat tire, but not because the city was invaded by Roman legions.

Scientific statements, in particular, are usually backed up by experimental evidence, in some cases evidence stretching back centuries or millenia. A statement that violates science-as-we-know-it or the collective experience of competent observers world-wide is thus inherently improbable. In parapsychology and similar disciplines, there is also a long-standing history of both incompetence and fraud on the part of practitioners. For this reason, it is often necessary to examine the findings of such researchers more closely than it might be for other, more traditional, scientific fields.

One of the most famous applications of this maxim is attributed to Thomas Jefferson. When it was reported to him that two professors from Yale University had discovered that meteors were bodies of rock and metal that fell to Earth from outer space, he is reported to have responded "I would rather believe that two Yankee professors would lie than stones fall out of the sky." At the time, the idea that the heavens were filled with space junk was a radical one, and the problem of scientific fraud has always been with us. On the other hand, Jefferson would probably have accepted without question the professors' unsupported word about the finding of a new type of bird in the Connecticut forests.

As it happens, further evidence about the nature of meteors was forthcoming, and today the idea that rocks fall from the sky is widely accepted.

Remember, WE are not the ones that are saying that the Earth will have major disasters because of "global warming" and millions of people will die.

You have the burden of proof, for such etraordinary theories.

When I see that raw data has been collected improperly, I can and will say so. That, as a scientist, is what I should be doing.

Anonymous wrote:...when you get upset and attack anyone that fails to agree with your current theories.

It's not an attack when you point out that someone doesn't understand something. Seriously (have you actually been to any scientific meetings, criticism can be very robust).

Anonymous wrote:Yes, I am taking names! Cool! I'm on a list, not even the creationists or Peter Nykinos put me on a list.

Anonymous wrote:"Extraordinary Claims Require Extraordinary Evidence"
What's so extraordinary
1) Does adding CO2 to an atmosphere cause it to warm? Why yes it does (this is simple physics, and an experiment that high school students can do)
2) Do we have evidence of warm periods in the past associated with high atmospheric C02 levels? Why yes we do!
3) Are we injecting CO2 into the atmosphere at a rate
far higher than any natural source, why yes we are!
4) Are we injecting sufficient C02 that basic physics (see 1) says will increase temperature? Why yes we are!
5) Do we actually see increases in global temperature? Why yes we do (by any of several independent measures)
6) If we carefully account for non-CO2 sources of warming, do they explain the warming we see? Why, No they don't (see figure above in main post)

There is nothing extraordinary about the claim that CO2 causes global warming (have a look at Venus for example), and we have a large array of evidence for it.

See this recent review paper for a nice mini summary of our knowledge of global warming, it even has references to real scientific papers.

Anonymous wrote Remember, WE are not the ones that are saying that the Earth will have major disasters because of "global warming" and millions of people will die.
(ps, Bloggers comment system sucks big time! Why can't we have blockquotes guys! Or a decent sized comment editing box).

The Earth is warming, we now have more than enough evidence to accept this. As the Earth warms, the sea level rises, as most of our cities are located near the sea, this will cause problems. Not just from flooding (which occurs rather late in the piece, unless the acceleration in glacial melting in Greenland is sustained, THEN we are in trouble much faster), but from ordinary things like king tides and storm surges. Now as mots of humanity that lives by the sea isn't in first world countries with fancy flood mitigation schemes ... you get the picture. And flooding is just basic physics, no fancy theories there.

Also, disease zones will move, they are moving NOW. Bluetongue disease is moving north. Global warming will result in lives lost. This is not some airy fairy speculation, but the tragic result of impersonal physical laws.

You can stick your fingers in your ears and sing "La La La I can't hear you", but the world has a way of ignoring that.

A great article indeed and a very detailed and realistic keep sharing..!