The Odyssey and the Celestial Clock 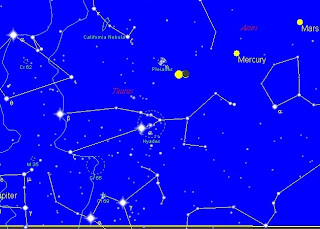 I love watching the patterns planets form in the sky. Close approaches of the Moon and bright planets are inherently beautiful, and provide a moving display against the predictability of the stellar backdrop.

However, you can also see the planetary motion as a celestial clock. The movement of the planets is fairly precise (although over the millennia the tugs of gravity move them about a little), and no two planetary alignments are exactly alike. So in principle if you know what the sky looks like when a certain event occurs, you know when it occurs.

A recent paper in the Proceeding of the National Academy of Sciences (read it for free here) used the sky pattens to date a central event of the ancient poem the Odyssey. In the poem a darkening of sky is used by a seer to predict the death of Penelope's suitors. Many people have interpreted this as an eclipse, but after much discussion, no one could agree what, if any, eclipse it refered to. Now two astronomers have identified the event as an eclipse on 16 April 1178, based on the patterns of planets and constellations mentioned in the Odyssey.

The date agrees with the generally accepted time frame of the Trojan war,1192–1184 B.C.E. However, it also requires a bit of creative interpretation in some areas. To find the locations of Mercury, the authors interpolate descriptions of the God Hermes travels as locations of Mercury in the sky. I'm a bit dubious about this step. Other positions (such as the location of certain constellations at sunset) are more clear, but overall I think it a bit of a reach.

Still, it is a nice piece of detective work using the planets as a celestial clock, go have a read of the original paper, and have a look at the commentary in New Scientist and Science Daily.