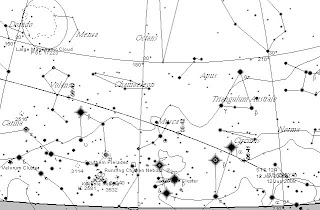 View of the Southern horizon as seen from Adelaide at 6:40 am, June 12, with the track of the ISS and Shuttle (clock to enlarge).

If you are living in Western Australia, Adelaide and parts south, Melbourne (and parts South) and Tasmania you will have the opportunity to see the ISS pass above the horizon with the space shuttle close behind. You have to get up around 6 am on Thursday June 12 to see this, and it is close to twilight, but it should be interesting to see the Space Station and the shuttle close together. 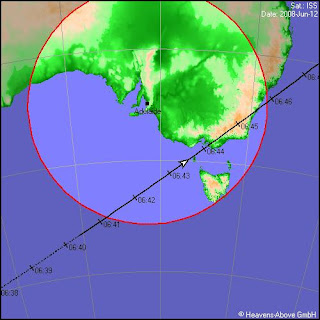 The other bad news is that they are close to the horizon (except in Hobart).

In Adelaide the pass starts at 6:41 am, passing by the pointers above the Southern Cross.

In Hobart the pass starts at 6:49 am, starting in the tail of Scorpio then zooming past Achernar.

In Melbourne the pass starts at 5:50 am, just below Canopus.

To get exact predictions and star maps for your location go to http://www.heavens-above.com/ 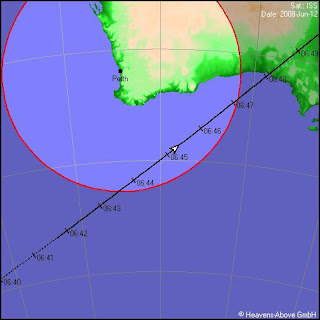 In Perth the pass starts at 6:42 am, passing by the pointers then above the southern cross

The Moon, Saturn and Regulus again
Moon, planets and fish and chips.
Comet Boattini and M41
A Ring Around the Moon
Carnival of Space #57 is here.
Moon, Mars and Saturn June 8-9
Asteriod Occultation
Kamikazi Kreutz Comet
It's Medical Research Week
Boattini amongst the Clusters (Part II)