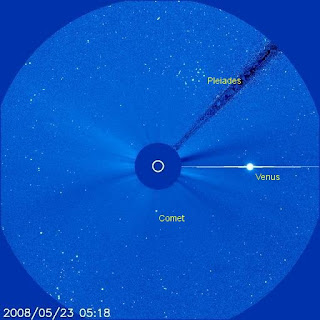 On the 23rd of May the SOHO and STEREO spacecraft picked up a Kreutz comet on its kamikaze dive into the Sun. Kreutz comets are a family of comets that are remnants of a disrupted large body whose orbits take them close to the Sun. Since the launch of SOHO, many of these comets have been picked up by the SOHO coronagraph.

For many Kreutz comets, when we catch their trip to the Sun is their last.

The animation below (hand rolled from SOHO C3 images) shows the comet as it disappears behind the occulting disk of the LASCO C3 camera. The comet did not come out again. The SOHO pick of the day site also has images and videos of the plunge as seen through the C2 camera (more close up and a bit more dramatic than my Bloggerified video), and the STEREO site has images and videos of the plunging through the COR2 coronagraph.

Note also the Pleiades and Venus passing each other by. A very nice conjunction, accompanied by comet.