The ISS, Mars, Saturn and Crux 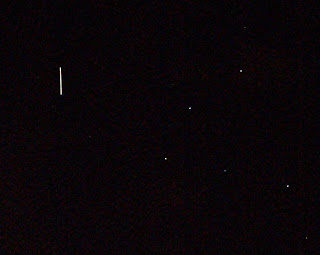 The ISS sailed past Mars and Saturn two nights ago, then zoomed through a crowded stretch of the Milky Way past Crux (the Southern Cross) and the Pointers.

You are going to have to click on the images to enlarge them to see the full detail. The image to the left is ISS passing Mars (bottommost bright object), Regulus (middle bright object) and Saturn (top bright object).

These three are forming pretty patterns at the moment (and keep an eye on them over the next few days). The ISS just adds to it. 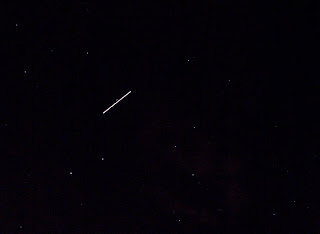 The image is that of the ISS passing Crux (the Southern Cross) and the Pointers (Alpha and Beta Centauri). You really do have to click on this one to get a feel for the panalopy of stars the ISS was going through. The ISS was at its brightests at around this point.

The animation is a little disappointing. To get it to a size that wouldn't choke blogger, I had to cut it down quite a bit, still you do get a feel for the ISS zipping past the planets from it.