And the Moon Turns to Blood 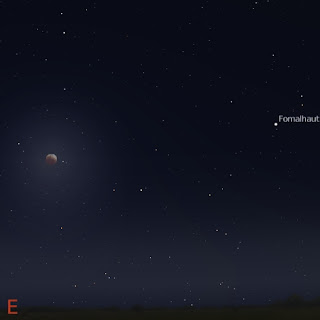 Moon as seen at 7:00 pm ACST facing east on August 28. The Moon is half covered by Earth's Shadow.

This coming Tuesday, August 28, there will be a total eclipse of the Moon. This will be the best total Lunar eclipse visible from Australia since 1999. A lunar eclipse occurs when the Moon enters the Earth's Shadow. While not as dramatic as a solar eclipse, a Lunar eclipse has a calm and serene beauty of its won. At the height of the eclipse, the Moon should be a deep copper colour.

The majority of the eclipse occurs in the early evening so the whole family can watch it. You don't need any special equipment to see it, just your eyes (although binoculars will be helpful).

Why not have a lunar eclipse viewing party in your street? For the eastern states and central states, the Moon enters the darkest part of Earth's shadow (the Umbra) during the late twilight. For people in WA, the Moon rises with the eclipse underway.

A table with contact times for all Australian States, and New Zealand (and links for other countries) is here at Southern Skywatch. I have made a printable PDF file with the Australian eclipse contact times and diagrams for handy reference on the night. It also has Kids eclipse activities on the back. You can download the PDF file here.

Yes, the Mars Hoax is still with us.
Taurus has two eyes
Mobile Moon
Now that's a Nice Time Machine!
10TH National Science Week Begins!
Waiting for Venus
Carnival of Space 16 has been constructed
Mars and the Pleiades Again
Parallax Regained, Asteroids in Stereo
Venus and the Moon, Tuesday evening