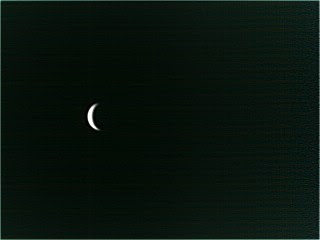 Strip image of the Phases of Venus (click image above to enlarge).

Sometime in September 1610, Galileo trained his telescope on Venus and began observing its phases. This seminal series of observations was the death blow for the Ptolemaic conception of the solar system, an Earth-centred solar system could not display the phases of Venus that Galileo had seen.

The phases of Venus are one of the simplest observations that an amateur can make to convince themselves that the planets do not rotate around the Earth. Because Venus is so large in its crescent phases, even small, home-made instruments can pick up the changes in size and illumination so you don't have to take astronomers words on faith. When Venus's crescent is at its thinnest, even binoculars with decent optics can pick it up.

Because the phases of Venus are iconic, and rather beautiful, I have tired to make animations of them. This is my first attempt from 2005, where I shot an image every couple of weeks. And here is an animation from a months worth of images from the beginning of 2006. But now, at long last, I unveil (drum roll)...

This animation was made from images taken between 11 February 2006 and 26 June 2006. Initially, images were taken every three days, but as time wore on, and the weather got lousy, by the end I was taking an image every 2-3 weeks. The images were taken through a 114 mm York Optical Skyrover Newtonian Refractor Reflector with an elderly black and white QuickCam using a Mogg adaptor. 2 minute AVI's (1 frame /second) were taken using Vega, then stacked using Registax. Processing was limited to dropping poor frames and adjusting wavelets to 9.0. Images from each observing session were overlain in The Gimp using layers, and difference mode to accurately align the layers. As some images were a bit skewed, the layer rotate tool was used to get images in the same orientation.

And there you have it. It's not the best animation of Venus's Phases (see here for a stunning one), but its shows what you can do with a very simple, entry level reflector and a cheap web cam. Astrophotography is not just for big scopes with expensive CCD cams.

Comments:
NICE! You really get a sense of Venus zooming ahead of us in the orbital race. RE: Stunning one... seriously.

Is "Newtonian Refractor" a typo?

Great example of what you can achieve with relatively simple equipment these days. Shows the change in size as well as the phase changes very effectively.

Yes, it was. Fixed now, thanks!

Thanks to everyone for their kind comments too. I hope this encourages other people with simple great to try some adventuorus things.