The Lakes of Titan reprise 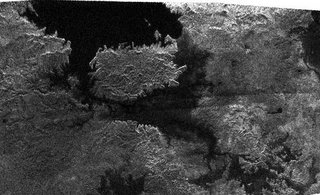 Although the Hyugens lander splatted into what appeared to be a soggy delta rather than a lake, Cassini has been rounding up evidence for lakes of liquid methane on Titan (rather than seas as people first thought possible).

The latest images from Cassini's polar flyby of Titan include this splendid one, of a large lake with an island in it. A high resolution version of this image (404 Kb) is here. You can also get a Titan Virtual Tour.