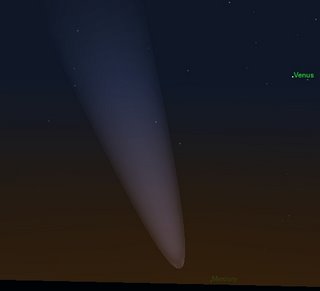 No, comet McNaught will not look like this. Provided it survives its passage around the Sun, it will be much dimmer than Venus, probably more like Mercury or even dimmer. I can't get Celestia to do a more realistic magnitude rendering (see below for actual images). But the point is that this image does give you a feel for where the comet will be, above the western horizon, half an hour after sunset on January 15th. This is the most reasonable time to start looking for the comet (or perhaps even 20 minutes after sunset).

On the 15th, the comet is just a fingerwidth above the horizon half an hour after sunset, and so will be very difficult to see. Try scanning the horizon with binoculars then or 10 minutes earlier (some northern hemispherians have picked up the comet 20 mins after sunset this way). 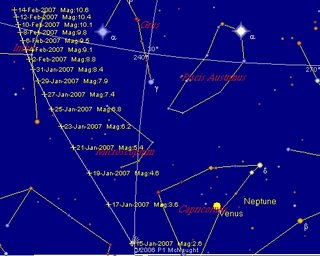 As the chart shows (the chart is facing southwest, with due west being the rightmost edge of the image, click to enlarge) The comet rapidly rises in the sky after the 15th, but also rapidly dims. On the 17th, the comet sets after nautical twilight (an hour after Sunset), so it should be readily visible in binoculars, and may also be spotted with the unaided eye. Thereafter, it should be visible as a fuzzy dot with the unaided eye. A printable chart suitable for most of the southern hemisphere is here. If you have a planetarium program, an ephemeris is here, which you can download into several program formats. Also, you can play with the JPL orbit simulator. A Celestial ssc file for 2006 P1 McNaught is here.

Having said that the comet may need binoculars to see most of the time, it may turn out to be spectacular. Australia's own Terry Lovejoy captured the comet in daylight (using a telescope of course). And northern hemisphere observers have produced some spectacular shots. Michael Jager, Gerald Rhemann and Stefan Beck have produced some excellent images, such as this one and this one. There are some great images from an Italian group, Hakon Dahle in Norway generated these fantastic shots, Dr. Eric Flescher from the US has a couple of nice images on his weblog too.

If you can't wait for the 15th, the comet will come in to the field of view of the STEREO cameras on the 10th (but the images won't be available until the 11th, and are in FITS format, so you need a FITS viewer, the Gimp can handle it) , between the 12th and the 15th the comet will be in view of SOHO's LASCO C3 camera.

For southern hemispherians, the Ice in Space forums will be abuz, there is a forum for maps charts and viewing guides, and images of the comet. Do drop in to see what's happening.

Mercury at Superior Conjuction Today
Transit of Iapetus, 7-8 January
A Christmas Beetle
The Star of Christmas
January Southern Skywatch Up
There's a Planet in There
First Images of Venus
Morning Moon with added planets.
A Nice Day For An Aurora
Summer Skies