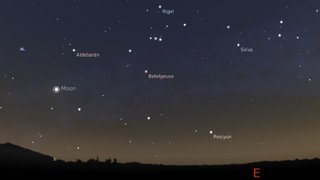 Eastern sky at nautical twilight on January 1 (click to enlarge)

The January Issue of Southern Skywatch is up now. It's up early as due to the Christmas Holdiays I will be doing Christmassy family things wth the Bettdeckererschnappender Weisle and the Boys. I doubt I will even see the computer in the next two weeks, but I do expect top see lots of Christmas pudding and roast meats of divers sorts.

Anyway, coming up is a nice encounter of Saturn with the Moon, Mars amoung the Nebula, and a possible January comet.

There's a Planet in There
First Images of Venus
Morning Moon with added planets.
A Nice Day For An Aurora
Summer Skies
My Night With (some) Geminids
Well, it's cloudy innit
War of the Weblogs
Yes, we have a CME
Aurora and Geminids Together?