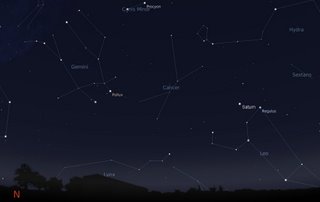 The northeastern sky as seen at 2:00 am (daylight saving time) in the Southern Hemisphere. Click the image to enlarge it. The radiant of the Geminids is just below Castor (the unlabeled bright twin to Pollux in the image).

The Geminids are unusual in that their parent body is 3200 Phaethon, an asteroid, rather than a comet. It is speculated though that Phaeton is actually a "gassed out" comet, and so the debris that makes up the Geminids may still be cometary particles.

The Geminids have maximum rate of 120 meteors per hour this year. We won't see that many as 1) the peak occurs at around 10:00 pm AEST, and the radiant, where the meteors appear to originate from, doesn't rise until around 11:00 pm 2) In Australia, the radiant never gets close to the Zenith, so the murk of the atmosphere reduces the number of meteors we see. Nonetheless, we should expect to see around a meteor every one to two minutes after midnight. The best time to observe is between midnight on the 14th to around 2-3 am on the 15th. If you watch a bit earlier you may see the occasional meteor shooting up above the horizon.

Even though it is summer, it is best to rug up warmly, as the early morning can be quite chilly. Having a chair or lawn lounge to sit on also makes life much easier. Face in the general direction of Gemini, but let your eyes wander over a fair part of the northern sky. The radiant is below Castor, but the meteors can start glowing a fair distance away. Do remember to be patient. If you wander out and look for five minutes then say "I didn't see any meteors" and wander back in again, the chances are your eyes had still not adapted to the dark. Also, remember that the meteors don't turn up evenly spaced, so you may have come out in a lull.

As well, the sight of the milky way, Orion, Saturn, the Beehive cluster and Leo will be well worth and early morning vigil.

Comments:
I for one will be out having a look at the Geminids Ian, for us in the NT, Gemini rises reasonably high in the northern sky, so the hourly rates should be better !
Cheers GAA_IAN
http://ntstargazer.blogspot.com/

Good Luck GAA_IAN, hopefully the skies will be clear. Sadly, in Victoria the fires take precedence, and the smoke will probably stop any viewing anyway.