Why Halloween Doesn't Work in Australia 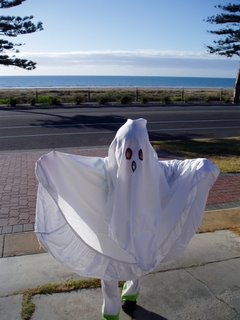 In the northern Hemisphere, All Hallows Eve occurs as the days shorten and the nights lengthen, the encroaching dark and chilly nights can make one believe that the restless spirits can walk.

Here in Australia, well, as the late evening photo shows, the days are lengthening, the sun shining brightly until nearly 7:00 pm (that's 8:00 pm actually, as we are on daylight saving time, but I still think in Real Time). Even when it does get dark, that warm night and the bright expanse of sky with the nearly full moon silvering the Norfolk Island pines just isn't creepy at all.

In my childhood, celebrating All Hallows Eve was unknown, but increasingly now the American version, with trick or treating, has been promoted here. The kids decided, with some friends, that they wanted to go "trick or treating". As no one in this neighborhood does, that caused some logistical problems. The Bettdeckererschnappender Wiesle had to word up some selected neighbours and give them lollies to hand out when the kids came around. Otherwise it would be a very limited trick or treat, fortunately the Twins Next Door got really into it and helped out with hand drwan lollie bags.

On the "night" all the "ToT" families gathered at HouseA for home made Pizza, apple bobbing and making spooky decorations, then various partners had to rush home to set up lolly Stations. I wanted to dress up as the Research Quality Framework . But my beloved thought that a bunch of paper tied in red tape wasn't spooky enough. Then I wanted to go as the Frankenvirus, but again, an icosohedron wasn't seen as spooky. In the end the kids demanded that I be a Mad Scientist.

So I dressed up in my labcoat (with a toy Beaker in the pocket), got some disposable plastic test tubes, some pH indicators and bicarbonate of Soda. I greeted the Trick or treaters at the door clutching brightly coloured test tubes that were changing colour just as I arrived. After that I did some more colourful pH tricks, did some foam experiments. With small kids present, I used weak acids and bases, so there was minimal risk, as a result, the foaming was unspectacular. However, when adding a cresyl violet to bicarb you get a nice vigorous foaming with an interesting colour change.

Then after handing out lollies, it was back to HouseA for sparklers, my Beloved's Redback Spider chocolates (at least there was some Australian content) and some quite reflection over cups of tea while the kids played on the swings.

A good night, but definitely not spooky.

Comments:
Ian, it sounds like it was a great Halloween despite it being spring. I like the mad scientist costume idea.

Oh it was crtainly fun! My Beloveds Chocy spiders were worth it alone. And I do like the Mad Scientist thing, even though it is a bit sterotyped. You can have heaps of fun, and teach a bit of science, whith simple indictor dyes and bicarb. In my younger days I used to do a Science Magic show, where I would suck hard boiled eggs into bottles, and magically light candles. I might reasemble my gear and start doing it again.