The Day After the Leonids 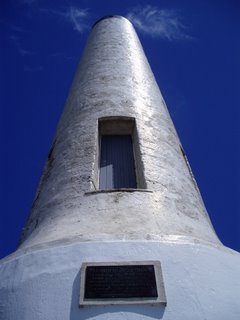 Although the predictions for Australia were rather low rates, there was always the chance of something nice happening. Despite a full day of walking, and carrying both SmallestOne and EldestOne up hill, and staying up to midnight carousing and eating chocolate cake, I actually got up at 3:00 am an made my way outside. The cloud that had hung around during the day had gone, the sky was clear and sparkling, Orion and Canis Major dominated my view. The air was mild and balmy,perfect meteor spotting conditions. Mt. Lofty being a, well, mountain, I didn't have a perfect field of view, the edges of my left and right visual field were cut off by trees, and the hills obscured the radiant proper, but I still had a wide swathe of clear sky in the right direction to observe. I saw 2 satellites, 5 sporadic meteors and ... one Leonid.

But what a Leonid, a bright fireball it shot across the sky, past procyon, threading between Orion and Canis Major leaving a persistent train to fade slowly away. It reminded me of the best Leonid of 1999, and some of the great ones from 2002. 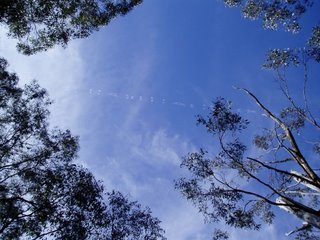 I think this was the fireball Belatrix saw a bit further up the road from me (He doesn't mention it in this report here, but did in his meteorobs report). Most Aussies seem to have had a very poor time, rates of between 1-5 per hour were common. Internationally, even those who could have expected a peak (like DaveP) didn't see much (excluding those who had lousy weather). However, some stations reported ZHR's in the order of magnitude of the predicted peak at the predicted time. It looks like the peak was very narrow. Keep an eye on Spaceweather, they have one Leonid image up, and usually set up a Leonid Gallery.

Comments:
All looks fantastic at Mt Lofty. Hostel, trees, the lot. No luck here. Clouds at the critical time last night, and massive low with storm force wind and rain tonight. Oh to be in.... Australia, now that Spring is here!

What a difference a day makes, Monday was cloud and wind, now we have massive lightning storms and more cloud, with 35 degree weather in between. We have a spare room if you come visit, but it has no airconditioning :-)