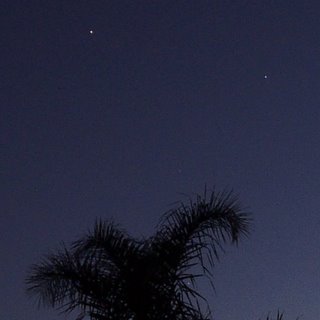 Saturn and Regulus (alpha Leonis) shine in the morning sky, as the ISS emerges from behind a palm tree (click to enlarge).

But what a session it was, I saw 21 Leonids in an hour. With a limiting magnitude of 5.5, and the radiant never getting more than 38 degrees above the horizon, that means the ZHR was substantially more than the 23 predicted. Indeed reports coming in from around the world suggest that the Orionids were in outburst, with at least a ZHR of 30.

But I saw some beauties, I saw two bright meteors shooy between the Hyades and Pleaides (of course my camera wasn't pointing that way). I saw a brilliant -6 fireball shoot straight down to the North), I saw some brilliant long trained meteors and as I ended the session, two Orioids shot out together. This was an excellent session. Unlike Saturday, when the trains were relative short and the meteors didn't go far from the radiant, these ones covered large chunks of the sky. I had the film camera covering the triangle between Orion, Sirius and Procyon, where most of the meteor action was on Saturday, but on SUnday the fireworks started outside that area (sigh). As well, I picked up 5 sporadics (one rather bright) and three satellites. A very busy and rather beautiful morning. Even wehn I was packing up the camra, a beautfiul meteor zoomed by, not a bad moring at all.

Over at the Ice-in Space Orionid forum it looks like other Asutralians have been having good sessions as well (scroll down to the bottom).