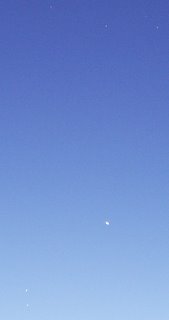 Mercury Rises [the two bright "stars" at the bottom] as Jupiter sinks under the head of the Scorpion (click to enlarge).

Over the coming week Jupiter and Mercury come together, being at their closest on the Friday 20th. This should be a very attractive sight (it looks pretty good at the moment), with both Mercury and Jupiter being very distinctive. Then on the following Tuesday, (24th) the Moon, Mercury and Jupiter line up.

I am tryig to make an animation of this, the problems being that a) I have to try and go out and snap pcitures during dinner, not cool and b) I was trying yo use a fixed arcitectural feature as a reference, so I could get star movement as well as planet movement. However, even though I have a point to set my camera up, eeven minor devation from night to night make it impossible to align correctly (GRRRR).

Oh, well. I'll try centring it on alpha Librae or something. Still should look nice.