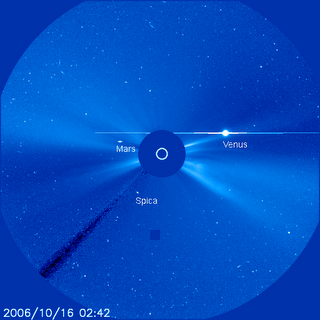 Image Credit NASA/SOHO (labels added by me, click to enlarge)

Anyway, have a look at the recent videos low (198k) and high (1.2 Mb) resolution. The cosmic ray flashes make it a bit difficult to follow, but you can see stars down to magnitude 4.5 at least.

Saturn, Moon and Spica (Tuesday 17th)
Mercury Rises [the two bright "stars" at the botto...
There's a Flare in There
RedSpot Jr. Again
12.76 second of fame
Paging Ethyl and Cary S
A bunch of links
Saturn as you have never seen it.
Comet M4 SWAN
More Moon Mosaics